Let’s talk memory for a moment. I suspect this is what most readers recall when the July 18, 1863 assault on Battery Wagner comes up in conversation:

The other day Kevin Levin refered to this action as “the 54th Massachusetts Volunteer Infantry’s unsuccessful assault at Battery Wagner.” While I certainly agree with Kevin’s broader point in regard to the aspects of the commemoration, I can’t help but draw a “memory” parallel here with respect to his “high water-mark” label. Somewhat as the “high-water mark” of the Confederacy at Gettysburg was long associated with just one of the participating divisions, we’ve linked, for good measure to be sure, the July 18th assault with just one of the participating regiments. Don’t get me wrong. I say this not to take away from the heroic deeds of the 54th Massachusetts, but rather to offer context. We have recast, for accuracy’s sake, the Confederate assault of July 3 as the “Pickett-Pettigrew-Trimble Charge.” Perhaps we should consider the term “Seymour’s Charge” for July 18:

Civil War Trust offered this Steve Stanley map in 2008 to support the effort to preserve the remaining sections of Morris Island (the yellow section in the middle of the map). The map depicts the column of regiments from the First and Second Brigades, Second Division, of the Tenth Corps under Brigadier-General Truman Seymour. All told around 6000 men attacking through a narrow corridor. And Seymour’s name isn’t even on the map!

Recall Gillmore’s original plan called for a siege of Battery Wagner as the second phase of operations. And I would say “short siege.” However events on July 10 gave the impression the Confederate fort might be taken short of a formal siege. Strong’s infantry assault failed to dislodge the Confederates, but Gillmore still held to the modified plan. What he failed to realize was the Confederate garrison, under Brigadier-General William Taliaferro, increased to about 1,300 men while all the preparations were being made.

Starting on July 13, he focused on silencing the Confederate guns in preparation for another infantry assault. Engineers prepared several battery positions on Morris Island and the Navy moved more gunboats offshore. The position of the land batteries and the firing instructions best illustrate Gillmore’s intent. The guns and mortars were to focus fires on the fortification to “dismount the enemy’s guns.” The fires were not concentrated against any single point in the works to break down the walls, as one might do for a siege (say like… Fort Pulaski).

Gillmore wanted to start this bombardment on July 16, but bad weather stalled commencement until on July 18. Following a morning of ranging fires, the bombardment commenced in earnest at around mid-day. In Battery Wagner, Taliaferro estimated 9,000 projectiles struck in and around the fortification. “In a short time,” Gillmore recalled, “the fort was entirely silent on the face fronting the land batteries, and practically so on the sea front….” However, Taliaferro, with only two of his guns out of action by that time, had simply reduced his fire anticipating the infantry attack.

Assuming bombardment produced the desired effect, Gillmore set the time for the infantry assault at sunset – a rare, for the Civil War, night attack. Initially, Gillmore only wanted to commit Strong’s brigade. But after consulting with Seymour, he agreed the entire division should move. The hope was the twilight would provide just enough light for the infantry to see their way down the beach, but not enough light the defenders could focus fire upon them during the advance. The attackers would go in with bayonets fixed, intending for close quarters combat. No engineers supported the assault. And none of the infantry brought forward equipment to deal with obstacles. As for the lead of this assault, Seymour explained:

The Fifty-fourth Massachusetts, a colored regiment of excellent character, well officered, with full ranks, and that had conducted itself commendably a few days previously on James Island, was placed in front.

Seymour went on to say that while the other regiments could easily form into column, the 54th, with 600 men, was too large and formed into two lines of columns. Indeed, one of the reasons the 54th was posted to the van of this column it’s strength in numbers. Lieutenant-Colonel Edward Hallowell recalled for the 54th’s official report of the action, “General Strong presented himself to the regiment and informed the men of the contemplated assault upon Fort Wagner and asked them if they would led it. They answered in the affirmative.”

Shortly after that, Colonel Robert Shaw ordered the 54th forward to commence the assault. The other regiments in the two lead brigades formed up behind. Lieutenant-Colonel Joseph Abbott, of the 7th New Hampshire, waiting in the second brigade line, observed:

Each of these brigades thus stood upon the beach in close column, and thus, while twenty standards opened their folds, and 6,000 bayonets flashed in the rays of the departing sun, they moved up in solid mass toward the batteries, where a hundred pieces of artillery still continued to thunder.

As the men advanced, Confederate canister, grapeshot, and musketry bore upon the ranks. By Hallowell’s account, the 54th crossed the ditch of the fort and reached the parapet. There Shaw and two of the regiment’s captains fell dead. The 54th held that position on the parapet for about an hour, by Hallowell’s estimate.

Behind the 54th Massachusetts, the 48th New York and 6th Connecticut swung to the right. Those regiments reached a section of the parapet which happened to be lightly manned. The 31st North Carolina was assigned that sector. But, as Taliaferro recorded, the North Carolinians “could not be induced to occupy their position, and ingloriously deserted the ramparts….” This allowed the two Federal regiments to gain the parapet and gain a lodgement in the works. But they needed reinforcement to secure the footholds gained by the initial assault.

In addition to Shaw, Strong and Colonel John Chatfield of the 6th Connecticut also fell mortally wounded. Further injuring the command structure, all but one of Strong’s regimental commanders went down with wounds. Command of the 54th Massachusetts went to Captain Luis Emilio as the last line officer standing. And Seymour himself was wounded.

Problem was Putnam’s second brigade did not follow closely as planned. After Strong’s advance, Putnam held his position claiming he was simply complying with orders from Gillmore (recall the original plan for advance). Seymour did mange to convince Putnam to move forward but the delay proved costly. Into this confusing night battlefield, Putnam’s regiments pressed towards the works. One of his regiments fired on a body of troops which turned out to be the 3rd New Hampshire and part of the 48th New York. But at best Putnam’s troops could only maintain what was gained by the first wave. As he directed his troops, Putnam was struck in the head and killed.

With the operation reaching a crisis, Seymour called for the Third Brigade. But at that point, Gillmore sent word to hold off committing the brigade. This halted any remaining momentum in the Federal attack. By midnight, the fighting began to fall off. The assault now turned into a retrograde. Captain Emilio managed to rally a large group of the 54th Massachusetts at a trench line 700 yards from the fort. That line served as a rally point for troops falling back from the failed assault. Going in and coming out, the 54th had furthered their reputation.

Looking at the casualty figures by regiment, Strong’s brigade felt the heaviest loss:

The artillery batteries reported six wounded during the fighting on July 18. That brought the total casualties to 1,515 men. The assault stands up as one of the bloodiest division-size attacks of the war.

There’s a lot to focus upon that went wrong regarding the July 18 attack on Battery Wagner – hasty reorganization, failure to rest and feed the troops, insufficient artillery bombardment, deviations from the original plan of action, lack of engineering support at the point of attack, and absence of any contingency plans. The severe loss among Federal leaders, from division commander down to the line officers, further hindered the operation. But perhaps most felt was the very narrow corridor which prevented the Federals from fully developing the assault. Say what you will for the failure, Gillmore would not repeat it on Morris Island. He would now return to his original plan – a siege of Battery Wagner.

From the broader context, the assault of July 18 was a rare example where battlefield failure turned into political success. The actions of the 54th Massachusetts received widespread attention in the northern papers. 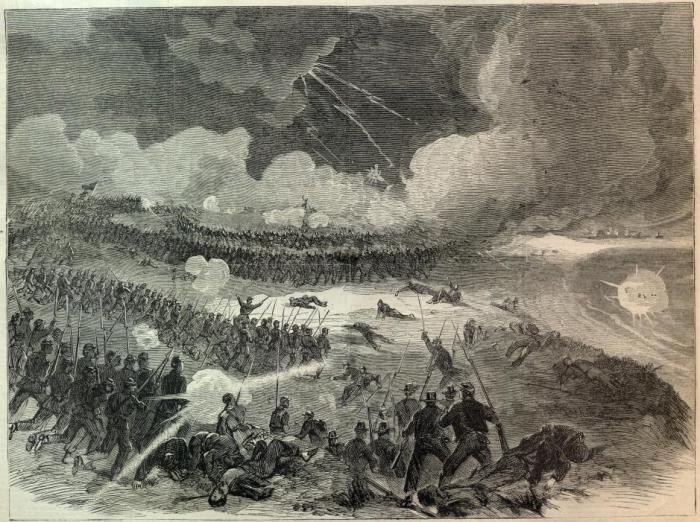 The Emancipation Proclamation had spawned a weapon of battle.

From the Boston Herald:

A woman is in police custody after officials say she splashed yellow paint onto a historic downtown monument honoring African Americans who fought in the Civil War, apparently because she wasn’t happy with how it depicted history.

Boston cops say they arrested Rosemine Occean, 38, of Quincy after responding to a report of vandalism to the Robert Gould Shaw and Massachusetts 54th Regiment Memorial.

Capt. Stephen Owens of the state Bureau of Ranger Services, which oversees the nearby State House, said the woman parked her car on Beacon Street around 4 p.m., got out and began dousing the century-old memorial with yellow paint, even hitting nearby pedestrians in the process.

One man whose daughter was splashed stopped the woman from leaving until police arrived, Owens said.

“She was just sitting there on the bench with a can of paint in her hand, talking to police,” Owens said. He said the woman was spotted just weeks earlier trying to break a sword from the statue and today indicated to authorities that she was upset with how the memorial depicted history….

(Read more and see pictures of the vandalized memorial at the Boston Herald site.)

Follow up stories from the Boston Herald provide more details of the incident:

A paint-splattered Quincy woman was charged yesterday with defacing a historic downtown monument honoring black soldiers who fought in the Civil War after officials say she splashed yellow paint on it because she was unhappy with how it depicted history.

Boston cops arrested Rosemine Occean, 38, after responding to a report of vandalism to the Robert Gould Shaw and Massachusetts 54th Regiment Memorial. Police say Occean had paint on her face, hands and clothes, and Capt. Stephen Owens of the state Bureau of Ranger Services said she still had a paint can in her hands. Occean is due to be arraigned today on charges of willful and malicious destruction to city property.

Owens said the woman parked on Beacon Street at about 4 p.m. and began dousing the century-old memorial, splattering passers-by in the process. Owens said she was spotted weeks earlier trying to break the Shaw sword and yesterday told police she was upset with how the memorial depicted history.

Another article goes on to say Mrs. Occean, who has a history of mental illness will undergo a psychiatric evaluation while being held on bond.

We don’t often see cases of monument, memorial, or marker vandalism solved so quickly. Only limited details about the misrepresentations of history, which motivated Mrs. Occean, have been reported. So we’d do well to avoid speculations in that regard, or any comparisons to other similar acts.