The May 11, 1864 edition of the Daily Eastern Argus, of Portland, Maine ran this list of casualties from the state’s regiments as reported by that time in the Overland Campaign:

The 3rd Maine Infantry was part of Brigadier-General J.H. Hobart Ward’s brigade, of Major-General David Birney’s division, in the Second Corps.   On May 6, 1864, the 3rd Maine was part of the Federal line rolled up by a flank attack directed by Confederate General James Longstreet.  Like most of the Federal regiments, the 3rd Maine was unable to turn facing in the confusion and tangled woods, so they fell back.  The regiment, as did others, rallied near the intersection of Brock Road and the Plank Road. There they fought for possession of the earthworks along the Brock Road.

In “Maine at Gettysburg” the Maine Gettysburg Commission noted, “The regiment made and repelled several charges during this memorable battle, and its men won fresh laurels by their courage and steadiness under the furious attacks of the enemy.”

Somewhere in the fighting, Lieutenant-Colonel Edwin Burt fell while leading the men.  I suspect his body was originally buried just down the Plank Road where a cemetery was established after the battle.  Later his remains were removed to the Federicksburg National Cemetery – Grave plot 3953.

Before the war, Burt had been an Ordnance Sergeant. Readers may recall that in January 1861 Burt, alone among military officials in the state of Georgia, refused to surrender his responsibilities until given orders to do so.  (And you might also be interested in the background work done by Robert Moore on Edwin Burt.)  Burt experienced the Civil War at the fore from the very start.  Eleven months from the end, it came to an abrupt end.

This Memorial Day, let us consider these 150 year old reverberations.

Yesterday, I attended all of the ranger led real-time hikes offered for the second day of the Wilderness 150th observances.  A rich day of history that now passes into my own personal “history” which I’ll remember fondly.  Here’s a few photos from what will become my sesquicentennial scrapbook, in the Wilderness Chapter – as we recalled the opening chapter of the Overland Campaign, 150 years before.

The first hike of the day covered Widow Tapp’s Field.  A few of the sights, as I cannot share the full sensation through the web: 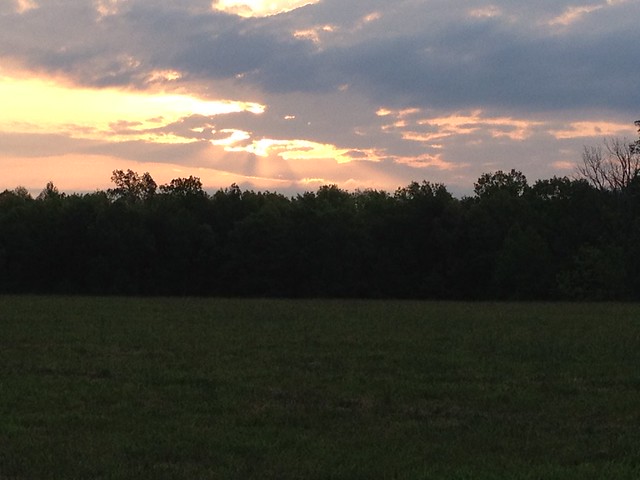 The second hike of the day covered the ground used by Longstreet’s men making the flank attack on the Federal Second Corps.  At times the going was difficult, giving us an appreciation for the problems faced 150 years ago.

After a mid-day break, we started the third hike, covering familiar ground near the Brock Road/Plank Road intersection.  We had an “interactive” session during that hike.  Rangers Beth Parnicza and John Hennessy lined us up across the woods, asking us to advance as the Confederates would have at that time 150 years earlier.

The “formation” broke up after only a few strides.  We were an “undisciplined mob” and quickly brought back on the trail for more hiking!

The last hike of the day went to the other end of the battlefield, to look at Gordon’s Flank Attack.   The crowd did not thin despite the late hour:

I didn’t get many photos for this last hike.  After 14 hours, my phone was running on those last heartbeats.

So from 6 AM until 8 PM, we walked the fields of the Wilderness.  We covered many miles of ground.  All of it well interpreted by the staff from Fredericksburg-Spotsylvania NMP.  I’m looking forward to the next round at Spotsylvania, which kicks off tomorrow.  Please do follow along on Twitter and Facebook!

I’d been waiting for Monday, May 5 all winter.  The first day of “real time” hikes over the Wilderness was superb.  The staff at Fredericksburg-Spotsylvania seem to step it up a notch with every 150th!

A few photos of the crowd at Saunders Field for the afternoon hike:

Later we hiked along the south side of the Orange Plank Road, up to the intersection of Brock Road. This is, if I have my facts straight, a new trail setup in recent years. Here’s how it looks before the tour:

And during the tour:

Excellent management by the park staff handling an extremely large group over what would be a difficult area to move around, much less offer a program!

The experiences throughout were rich.  We looked across the fields where the 140th New York charged; walked where Shelton’s guns were captured; stood where the Vermont Brigade defended in, and then assaulted through, the Wilderness; we discussed Lane’s North Carolinians and their predicament at sunset of the first day of battle…. and all at 150 years to the hour, if not the minute, from the time these things happened!

The park has many, many photos posted, in album format, to their Facebook page.

If you can’t be at the battlefield today, browse over there and throw down a few likes.