As I relate the contents of the ordnance summaries, you readers regularly see mention of Hotchkiss-patent (or pattern, if you prefer) projectiles.  Indeed Hotchkiss projectiles received nearly a full half-page in the ledger-sized entry form:

Twenty columns covering different payload types (and in some cases, fuse types) among the standard Federal rifle artillery calibers.  So where did these come from and what made them different than other projectiles?

The answer to the first part is the fertile mind of Andrew Hotchkiss, with later refinements by his brother, Benjamin Berkeley Hotchkiss.  They were sons of Asahel Hotchkiss, who’d established a factory outside Sharon, Connecticut.  The Sharon Historical Society maintains a Flickr page with some undated images of the factory: 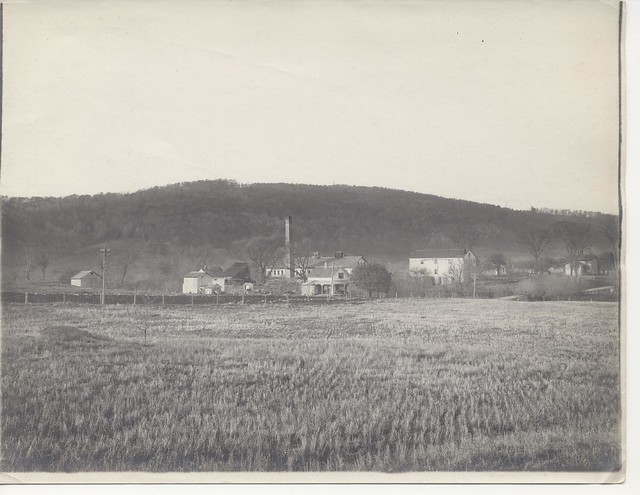 Born in 1823, Andrew Hotchkiss did not allow a birth defect hinder his mind.

Lacking functioning legs, he moved about on a shop cart and applied his skills to improving machinery of many sorts.  But his focus on armaments bore fruit in designs for rifled weapons, metallic cartridges, fuses, and, to the point of our discussion, projectiles.  On October 16, 1855, he received Patent No. 13,679 for an Improved Projectile for Ordnance:

The specification from this patent application provides the answer to the second part of the question.  Andrew described the construction as such (with references to the figure above):

The body of the shot consists of a casting having one end formed into a blunted point, similar to the usual conical ball, as seen at A, Fig. 1.  The opposite end this body from a little beyond the middle tapers off into a tail-piece, (seen at B,) and is also squared at the end. Upon each corner of the square metal is cut away a little, so as to form a projection, (shown at the letter C,) the object of which will be explained farther on. About the middle of the body A two recesses are formed completely around, as at e and e’, thus leaving a projection, i, between. Upon these the lead ring is cast, and the recesses and projection serve to keep it on. …

The second casting will now be described.  This consists of a cap which is to enclose the tail-piece B, and is to effect the expansion of the projecting edge of the lead ring into the groves of the cannon.  It is shown at E, Fig I, with a view looking directly into the interior in Fig. II. The rim of this cap is chamfered or beveled off from the outside, as shown in the sectional part at i, and where it will be seen to fit in and press upon the like beveled ridge of the leaden ring….

In short, a Hotchkiss projectile had three parts – the main body, a lead ring, and a tail cup.  The lead ring is what we know as a sabot.  As to how this all worked in the gun:

The effects in the act of firing are as follows: The bore of the cannon must be spirally grooved on a principle similar to that of a rifle. The flat part of the ring C should fit the smooth part or “lands” of the bore. In sending it down the flexible ring may be slightly expanded by a blow of the rammer as soon as the shot is home. It is in the act of firing, however, that the ring C is expanded so as to take a full impression of the grooves, for by the force with which the cap E is driven toward the body of the shot, or A, and before the momentum is communicated to the latter, the lead ring will be expanded, that being the point of least resistance, and be thereby caused to take the impression of the grooves, as also to be packed tightly against the rest of the chamber.  This prevents windage, and of course insures the full effect of the powder, while at the same time rotary motion is imparted to the shot. The flexible ring also has this important advantage, that it does not wear or damage the grooves of the gun, even in the case of “stripping,” should such action occur, and hence there is no reason why the wear should not be as long as in the plain bore.

At other parts of the application, Andrew discussed the effects of the cup expanding the lead ring in a uniform manner.  Such prevented a case where the ring expansion was correct and did not allow for windage on one side which would “consequently destroy the accuracy of the fire.”  While I like quoting directly from the application, as it provides the reader with the precise technical description from the inventor’s point of view, the text is somewhat formal in tone.  The gist of this all is simply – when fired, the cup forced the expansion of the lead sabot and thus forced the projectile to use the rifling of the gun.

The other perspective gained from citing the lengthy technical narrative is we get the derived advantage of the new invention.  Such allows us to refine to more precision the oft-cited description of rifled artillery performance on the Civil War battlefield. You know…. spirals like a football?  That allows for accuracy.  But that spiraling does nothing for range (and in the larger equation, even adds resistance that might detract from range).  But, as the Hotchkiss patent application points out, by the delay in movement of the projectile more force of the powder is imparted as it burns closer to full consumption.  Not only that, but because the bore is sealed around the projectile, all of the force of the powder… well at least more than in a smoothbore… is imparted upon the projectile.

Keep in mind, this was the original patent let to Andrew Hotchkiss some six years before the war.  That patent illustration differs considerably from the surviving rounds we see today:

Not only is the back end of the cup flat, if we take off the sabot, and we see the body and the cup are more angular underneath:

Comparing that original patent to these projectiles actually used during the war is the next part of the story – refinement of the original patent. Sadly, it is a part of the story that Andrew would not play a central role.  He died in 1858.  His brother, Benjamin, would continue the work to produce one of the most important projectile types used in the Civil War… in addition to transforming a small family business into an international arms corporation.  In the next part of this series, I’ll discuss the refinements so we can look into interpreting the columns of the summary in more detail.

3 thoughts on “Ordnance Geniuses: The Hotchkiss Brothers and their projectiles, Part 1”