This being the season of giving, I ask what have we given back to the Civil War field of study?  We all “take” from our studies – reading primary and secondary sources, walking the battlefields, and receiving knowledge all around.   But what do we give back in return?  How this season we “clean up” some corner of Civil War study that need be straightened or otherwise put in order?

Consider… Throughout the Sesquicentennial discussions we heard about some major figures from the Civil War being “rehabilitated” by historians.  Most notable is George B. McClellan.  We even heard mention of Joe Hooker.  Though I still lean towards strict twelve step process for Little Mac… someone skipped a few steps with McClellan in my opinion.  This is not a new notion for historians.  During the Centennial, US Grant was “rehabilitated” to some degree, mostly by that magical prose from Bruce Catton.  William T. Sherman was moved but a few shades to the good side of Lucifer himself.  Though we really should recognize the work of British admirers decades earlier, who sort of threw a mirror in our American faces.  However of late Grant is being “un-rehabilitated” back to a mere mortal.

What I have in mind is straight forward and altruistic – pick a figure due “historical rehabilitation.”  Name any figure from the Civil War – general, politician, or other.  Pick a poor figure.  Someone you think has not gotten a fair shake through the historians’ collective pens. Then offer up a few paragraphs explaining why this figure is worth a second look.  Think about it… are there any persons who are completely nonredeemable?  Totally incompetent? Without any merit?  Well… maybe there are some.  But I’d submit that to be a small number within the larger sample set.  Besides, even H. Judson Kilpatrick, Alfred Pleasonton, and Franz Sigel had good days to speak of!

I’ll make the first offering.  This is my target for rehabilitation: 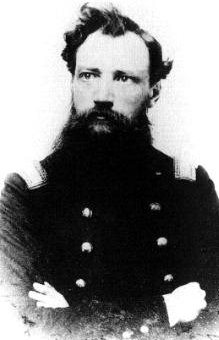 Alexander Schimmelfennig.  Like most, my introduction to Schimmelfennig was the butt end of many jokes about “hiding with the hogs” at Gettysburg.  Schimmelfennig’s stay at the Henry Garlach house has come to epitomize the failings and faults of the Eleventh Corps in the battle.

Over the years, I’ve learned not to add an extra n, making his name an active present tense verb, to Schimmelfennig. Though you might find more than a few cases where I’ve slipped and not corrected.  Furthermore, I’ve come to recognize my characterization of Schimmelfennig’s actions were but one of many collective misunderstandings (being kind… maybe collective ignorance?) about the actions at Gettysburg.  Indeed, our myopic view of that battle has caused no short list of misconceptions.  Schimmelfennig is one of many receiving short treatment, and outright insult, due to the intellectual white elephant, named Gettysburg, stuck to history’s charge.

Let us first be fair about Schimmelfennig at Gettysburg.  Certainly his July 1, 1863 on the field is not fodder for any great story about military prowess and proficiency.  Though it was not an example of bumbling incompetence.  Why was he in the Garlach back yard to start with?  Well it was because, unlike many of his peers and superiors, he was not emulating General Gates’ flight from Camden in search of “high ground” south of town.

And in the two years that followed that stay in the shed, Schimmelfennig demonstrated he was indeed a very capable field commander… in the oft overlooked Department of the South.  I’ve chronicled those activities during the Sesquicentennial… and will mention a few key points here.   Schimmelfennig first went to the department as part of Brigadier-General George Gordon’s 1st Division, Eleventh Corps, sent as reinforcements in late July 1863. The Brigadier-General led a successful demonstration in February 1864 on John’s Island; assumed responsibility for the front against Charleston through the spring and early summer 1864, directing several bombardments of Fort Sumter, and mounting demonstrations to aid the main operations elsewhere;  And played an important role in Foster’s July 1864 “demonstration” that nearly broke through to Charleston.   After returning from leave (recovering from malaria), Schimmelfennig was in command of the forces that captured Charleston on February 18, 1865.

Schimmelfennig readily adapted to situations and was innovative.  He successfully used of Hales rockets in an assault role and urged the troops to use rudimentary camouflage to disguise their activities.  To the many USCT regiments in his command, he offered fair and complementary leadership, advocating for pay equality.  The naval officers working with him, particularly Rear Admiral John Dahlgren, considered Schimmelfennig the better of the Army generals to work with at Charleston.

And we should remember, as if a name like Schimmelfennig would allow us to forget, that the general was not American-born.  Thus he faced much of the institutional bias within the Federal officer corps.  Schimmelfennig, a Prussian, was a veteran of the revolutions and wars of 1848.  Pulling on our historian sensibilities, Schimmelfennig was a bit of a military historian himself, providing context to the conflicts between Russia and Turkey in the years leading up to the Crimean War.

Oh, and I should add, Schimmelfennig “pioneered” the use of petrochemicals to ward off mosquitoes…. Um… by smearing kerosene over his exposed skin while on duty at Folly and Morris Islands.  Not exactly DEET, but you know.  Fine… he was a bit far short of a renaissance man.

At any rate, you get my point – Schimmelfennig’s service is done a dis-service by overly emphasizing those three days in July 1863… or even after weighing in his (and the Eleventh Corps) performance at Chancellorsville months before.  Maybe he was not among Grant’s Generals depicted in Balling’s painting, but Schimmelfennig served with distinction during the war.  He is at least deserving of more consideration than “a brigade commander at Gettysburg.”

That’s my proposed target for rehabilitation.  What’s yours?  And why?

One thought on “For the holidays, lets each rehabilitate some Civil War general… I call Schimmelfennig!”