As I step through these summary statements, I tend to spend the most time thinking about the small arms columns.  Normally, as you can tell by this blog’s focus, I’m not a small arms researcher.  Not that I’m not interested.  Just that cannons take up more of my precious research resources.  However, as mentioned last week, the figures in those columns sometimes give indicators as to the battery’s utilization in the combat zone.

Perhaps it should be enough to simply consider the number of small arms by loose categories – long arms, pistols, and edged weapons.  But that’s contrary to my nature.  When I see those printed column headers, it tells me the clerks in Washington were particular about their bean counting for some reason.  Furthermore, the written headers on the blank columns are equally interesting.  Thus I look for their definition of those column headers.  So consider one of the snips with those small arms columns:

This snip covers the 2nd Regiment Light Artillery of Illinois.  I select this as it provides a good example of the variety of column headers.

In the center of the column headers (to the right of the Regiment column and the red cut line) is a heading for “Muskets and Rifles.”  For the December 1862 summaries, we see those as informally defined and written in as needed.  Unfortunately we don’t know what type, among the multitude of types used by the Federals, of carbine that Battery I, 2nd Illinois had on hand.  But they had four of them.  (And a shout out here – Phil Spaugy, the National Commander of North-South Skirmish Association and a blogger about many things related to the Civil War and Ohio, has been very helpful interpreting the “chicken scratch” that is written in many of those columns.)

Summaries from later in the war have formally printed column headers, seen here with the 1st quarter 1864 (March):

Still, there are some scratch outs and inked in changes to interpret.  But we see Ballards, Burnsides, Maynards, Sharps, and Spencers along with musketoons, Springfields, and Enfields.  However, I would point out that like the cannon columns, we must take any data entries in these small arms columns with a grain of salt.  With more formality came less flexibility, and one might say less precision.  If a unit were armed with some other type of weapon – say a Henry rifle or Smith’s carbine – then where is there room?    Not on the formatted summary sheets.  So the door was open to all sorts of “clerical magic.”

Looking to the right of the long arms, we see the familiar pistol columns.  In the 1862 form, there were three columns – percussion and two revolver types.  The former occasionally had a written addition such as “dragoon.”  The later had various written declarations referring to the caliber.  Early in the 1862 set, we’ve seen “.44” and “.37”.  That latter number most likely referred to the ball diameter of the smaller of the two standard calibers.  Later in the 1862 set, those are simplified to “Army” and “Navy” calibers.

And this is where we can start talking about specific pistol models.  I’ll avoid a lengthy dissertation on the already well known history of Mr. Colt’s patent revolver (and prepare for the lengthy comments from Colt enthusiasts!). The story began with the Colt-Paterson revolvers in .36-caliber acquired by the military in the 1840s.  For the larger caliber, most pistol aficionados will identify the Walker-Colts of 1847, the Colt Dragoons of 1848 and 1849 as .44-caliber weapons.  These fired a 136 grain lead ball or 212 grain ogive (pointed bullet) projectile that was slightly larger than barrel diameter (some will round that up to .45-caliber, while the 1862 Ordnance Manual indicated .46-inch diameter).  The powder charge behind those projectiles was 58 grains (ball) or 50 grains (ogive).

Those six (or five if you are safe) cylinders filled with powder and ball added to the rather hefty weight of over four pounds for a “hand” gun.  The Colt went through numerous refinements and improvements in the decade leading up to the Civil War.  One of the chief refinements was weight reduction.  One means of reducing the pistol’s weight, which first applied to the civilian market, was to adopt a smaller caliber projectile.  For the military customer, this surfaced as the Model 1851 Navy Revolver:

This .36-caliber pistol fired a 78 grain ball with 25 grains of powder, or a 145 grain bullet with 17 grains of powder.  So with just ammunition weight alone, a savings of almost 50% right off the top.  At 14 inches long, around two inches shorter overall compared to the Dragoons, and incorporating more refinements, the Navy weighed but 2.6 pounds.

However, Colt didn’t stop the improvements.  In 1860, the evolution produced two new revolvers for military customers.  First came the Model 1860 Army Revolver in the original .44-caliber.

Again, I’m giving the “short version” of the story here and will avoid discussion of the variations within a thirteen year production run of this particular model.  The Model 1860 fired a 136 grain ball, 155 grain bullet, or 216 grain bullet, with a reduced powder charge (39, 26, and 30 grains of powder, respectively).  However, the Model 1860 was about the same size and weight as the smaller caliber Model 1851.  The main point with respect to the summaries is that .44-caliber was by 1862 synonymous with “Army”.

The other “new” Colt was given the designation Model 1861 Navy and produced in .36-caliber.  The smaller Colt was but 13 inches long and weighed a few ounces less than the larger caliber Model 1860.   The main point here, respecting our discussion of summary reports, is the “Navy” was .36-caliber.

As with the Army, these Model 1861 revolvers had a very long production and service life.  And an interesting, entertaining role in American history to say the least.  As with the discussions soldiers and law enforcement have over handguns today, the choice between “Army” and “Navy” boiled down to handiness and firepower… both qualities somewhat perceived vs. actual.

But… lets not get locked on Colts.  There were a dizzy array of vendors and patents offering handguns for military purchase (or private purchase by military personnel) during the Civil War.  But for my purposes today, let us simplify that back to the calibers mentioned in the summaries – “Army” and “Navy.”  In that case, we run into the second-most widely recognized revolver of the war – the Remington: 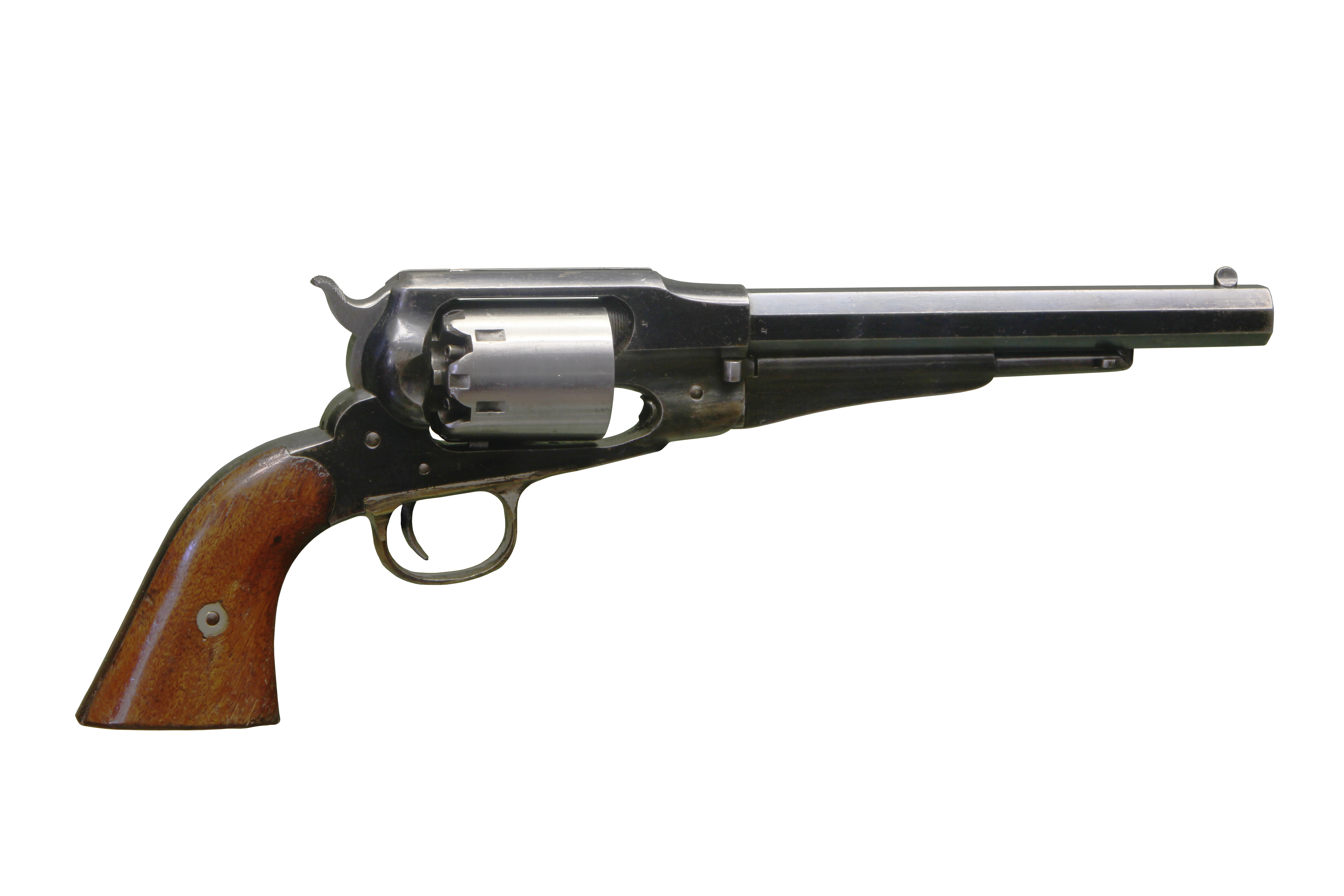 The Remington came in several calibers, but specific to military contracts came the .36-caliber Navy and .44-caliber Army.  Likewise, other pistol makes were classified by the “Army” and “Navy” calibers.  So we see references to Savage Model 1861 Navy, the Whitney Navy revolver, or Starr Army and Navy models.  Not to mention the “Pocket” of .31-caliber, often picked up as private purchase.

The point here, in reference to those column headers, is that “Army” or “Navy” revolver did not necessarily mean Colt.  For the 1864 version of the table, there were separate columns for Colt and Remington, but nothing for those makes.  As with the long arms, I would not propose that every artillery battery was exclusively armed with Colt or Remington revolvers at that time. Rather those were the only columns the clerks were allowed to work with.

We might argue over relative merits of makes and models, single-action and double-action, and other particulars.  And I’m sure there is someone out there clinging to their LaMatt revolver fantasies.  But from a functional point of view, let us narrow this down to the two basic calibers – Army and Navy – for consideration of logistics.  And even then we are splitting hairs a bit.

I’ll follow this up in a few days with a discussion of the types of edged weapons mentioned on the summaries.  Not as glamorous as the cavalry’s application of the sabers, their inclusion on the list warrants at least a mention here.