NOTE:  This post was badly edited upon first publication.  The error was due to cutting and pasting of portions for serialized postings.  I’ve revised the post to provide the desired sequencing of Gray’s conclusions instead of Whittaker’s, which were intended for the follow up post.  Sorry for the confusion caused by the clean up.

Going into combat, the infantryman had his musket and bayonet.  One weapon with two different modes of use.

The artilleryman had his cannon.  One weapon with several types of projectiles for different purposes.

But the cavalryman might, if he was properly equipped, go into battle with a carbine, a revolver, and a saber.  (Let’s not go crazy and mention the lances, however).

This array of weapons was due to the varying roles the cavalry was called upon to perform.  A carbine was preferred for picket duty or skirmishing.  But for up close fighting, the revolver and saber were preferred.  Though I would point out the commander’s preference tended to play into the selection of saber and revolver.

Each of these weapons (fine throw in the lance too) had a different set of drills. And by extension, each had a particular set of tactics that a commander might employ those drills against.  From the non-cavalryman’s view, I would argue this made the cavalry seem disorderly at some level.  Again, the infantry, with their one basic weapon, had a common set of drills.  How many ways can you load a cannon?  But the cavalry trooper had all those “schools” to learn about sabers, pistols, and carbines.  So some perceptions, well-founded or not, took hold:

Even today, you mention cavalry and images of gleaming sabers come to the mind’s eye.   After all, doesn’t everyone want to be on the horse at full gallop swinging that big edged weapon around?

But we read, in most discussions centered on tactics, that the saber was used less during the Civil War compared with earlier wars.  However, examining the source material we find the saber was still often employed in the melee.  In his study of Cavalry Tactics, Captain Alonzo Gray opened Chapter I with a discussion of the revolver and saber when used for close combat.  He took up the question as to when should each be used.  Quite number of the actions Gray called upon occurred on June 9, 1863 around Brandy Station, Virginia.

Gray starts with mention of Colonel Williams Wickham and actions near Stevensburg:

Colonel Wickham and a few of his men threw themselves into a field on the roadside, and by the fire of their pistols checked further pursuit.

I’m less inclined to call this a successful use of pistols in the close melee, as we know this occurred at a time after the 4th Virginia Cavalry broke, and which General Wade Hampton blamed the loss of his brother Lieutenant-Colonel Frank Hampton.  The Federals didn’t press this to advantage, so it’s hard to say the selection of the revolver made much difference.  And I’d argue that Wickham’s “stand” really was not much of a stand to begin with, being more of a fleeting rally.

Further into the discussion, Gray offered examples of individual combat between those armed with sabers and others armed with revolvers.  Staying at the Stevensburg sector:

Colonel [Frank] Hampton, while engaging one of the enemy with his saber, was shot through the body by another, and mortally wounded.

And one, from another sector of the battlefield that had immediate and important implications on the fight (and I’d argue also on the campaign which followed):

Perceiving his danger, Colonel [B.F.] Davis turned upon Allen with a cut of his saber, which [Lieutenant R.O.] Allen avoided by throwing himself on the side of his horse; at the same moment he fired and Colonel Davis fell.

In that instance, along Beverly’s Ford Road, the initiative slipped out of the hands of the Federals. All by way of a single pistol shot.

But back from the historical implications here, what does this say about the tactics, drill, and weapons employed?  Wryly, do we say “don’t bring a knife to a gun fight?”  Well it is not that clean a cut… if I may turn a pun.

Further along in the discussion, after turning to other actions on other battlefields, Gray cited instances where the saber’s shock effect was of great value in the melee.  Among those cited vignettes, Gray circles back to Brandy Station.  This time, we go to Fleetwood Hill with the attack of General H. Judson Kilpatrick’s brigade, singling out the 1st Maine Cavalry:

They outnumbered us three to one, but could not withstand the heavy saber blows of the sturdy men of Maine, who rode through them and over them, gained the hill, captured a battle-flag and many prisoners, among them the rebel General Stuart’s adjutant-general. From this moment the fight was one series of charges, every regiment of the brigade charging, rallying, and again charging until ordered to retire.

Granted, we must take Kilpatrick’s report with salt.  But in defense of Gray’s selection, the other quotes used for Brandy Station came from Major H.B. McClellan’s Life and Campaigns of Major General J.E.B. Stuart, written after the war.  I get the impression Gray was reaching for some account from what one can argue was the largest cavalry melee of the war, and came up with but Kilpatrick’s account to use for his point.  What we can agree upon, having access to a wider range of source materials than Gray had in 1910, is that the saber was used to good effect by both sides on Fleetwood Hill that day.  Indeed, both sides mounted saber charges and counter charges… with ultimately the victory going to the side that charged last.

At the end of his discussion of sabers and pistols, Gray concluded:

It will be seen from the next chapter that during the War of the Rebellion, the same as for centuries past, the saber was essentially a weapon for shock action. During the thick of the melee it was still to be preferred; but when the melee began to dissolve into individual combats the saber was or should have been exchanged for the revolver…. In the individual combat the revolver will be the winner in almost every case.  If the trooper is expert in its use, he has nothing to fear from an individual enemy armed with a saber.

In the end, Gray did not claim the saber was obsolete.  Rather that each weapon had a role and place… and should be retained.

Put this in context.  Those words were published in 1910, just years before the trenches of the Western Front with their barbed wire and machine guns.  Now we might wave that aside as backwards thinking at a time when technology had eclipsed the tactics of old.  Maybe cast a few jokes at Gray’s expense….

But, the cavalry and their sabers remained on the battlefield… and in some cases were employed with effect. 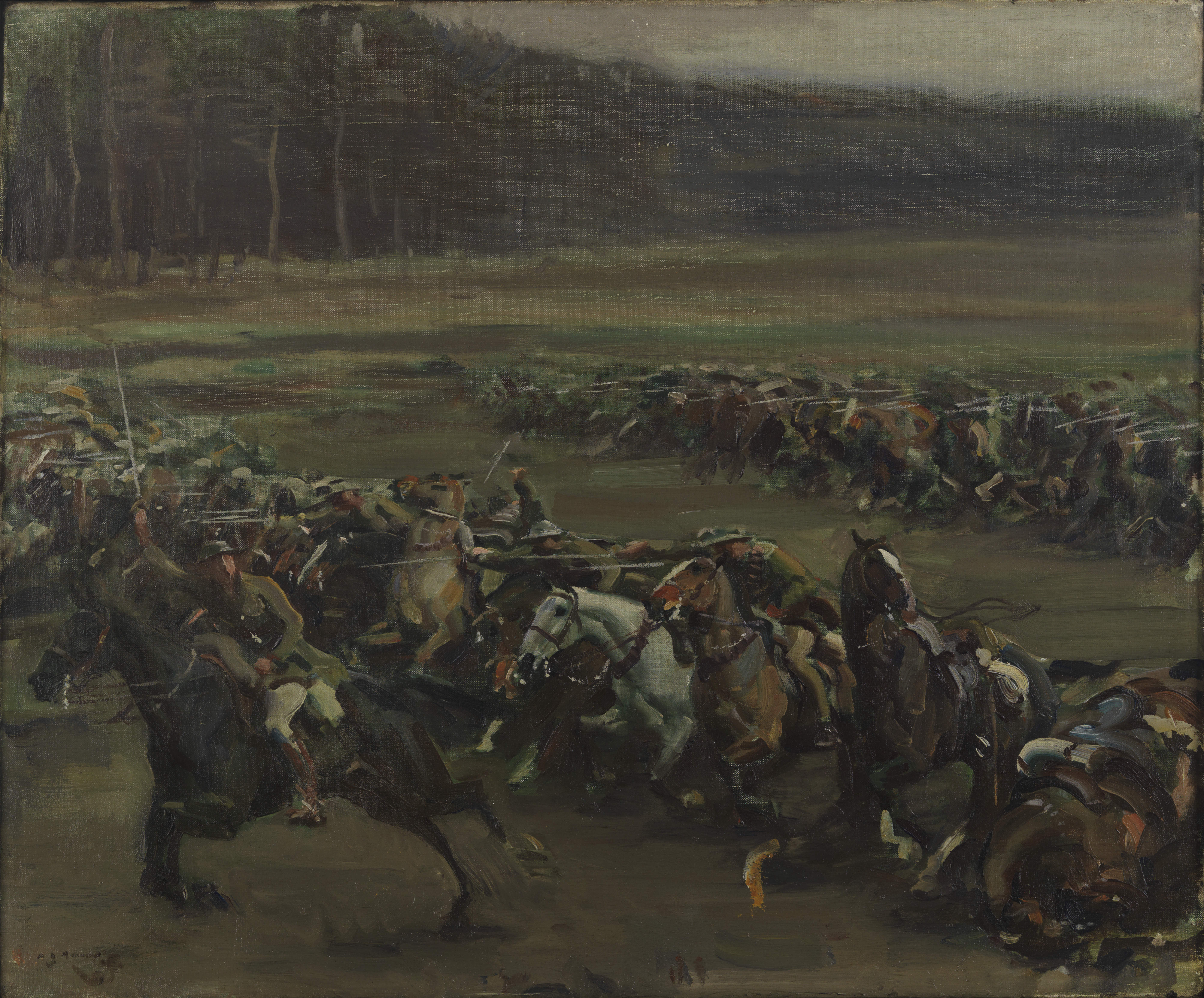 March 30, 1918.  Cited as the last saber charge of World War I, Lieutenant Gordon Flowerdew’s C Squadron of Lord Strathcona’s Horse “moved” the Germans at Moreuil Wood with their sabers.  They payed a steep price to blunt a German offensive.  Nobody, including Gray, ever said cavalry charges were cheap, bloodless affairs.

3 thoughts on “Cold steel or hot lead? Saber and revolver for the cavalry in close combat”