No posts for the last week of July.  Instead of “on the road” posts as offered during vacations in the past, I opted to just let the grass grow here on the blog.  During our trip, we added a number of Civil War related sites into our itinerary.

Several stops in Tennessee, including a lengthy tour at Johnsonville, Tennessee… or rather what was Johnsonville.

During the second half of the Civil War, the site was a major Federal depot supporting operations through middle Tennessee and deeper into Georgia.  Students of the western campaigns know this site for the action on November 3-4, 1864, in which Major-General Nathan Bedford Forrest used his “navy” to capture and destroy the depot. Today the site is partly submerged by Kentucky Lake.  Though substantial earthworks remain on the high ground. 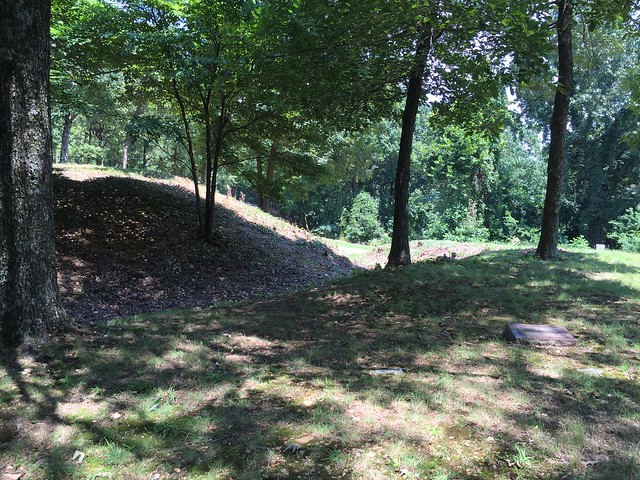 The Johnsonville State Park includes an excellent museum, which covers many aspects of the depot’s and town’s history.

And the trail system is well interpreted.

The Johnsonville State Park on the east side of the river/lake matches up with the Nathan Bedford Forrest State Park (which… who knows… might get renamed in the future) on the west side.  I’ll have more on Johnsonville in future posts.

After some time spent at my old family “homestead” in Missouri, we headed through St. Louis.  There are many Civil War related sites in and around the city, and most are familiar to me.  But our short stay precluded a full tour.  Besides, the Aide-de-Camp had some other objectives in mind!  On our way to the Arch, we took in the Old St. Louis Courthouse.  The St. Louis Circuit Court met in that courthouse through the mid 19th century right up into the 20th century.  Perhaps the most famous case heard in the courthouse was that of Dread Scott v. Sandford.  The National Park Service has arranged the courtrooms to the appearance of that time period.

It was in one of these courtrooms that Dread Scott eventually received his freedom, in May 1857, as result of manumission.

Before leaving St. Louis, we toured Jefferson Barracks.   This base, which has supported military operations from 1826 right up to the present (as a National Guard base), saw significant activity in several wars.  During the Civil War it was a garrison, depot, and hospital.  Today, the Missouri Civil War Museum occupies one of the early 20-th century buildings of the old post.  I will have more on this museum in a trip report post. Jefferson Barracks National Cemetery contains the remains of over 8,500 Federal and 1,000 Confederate soldiers.  Those include many remains originally buried at other places across Missouri, indicative of the widespread wartime activity in the state.

And as you can see from this photo, a number of those graves are simply “unknown.”

From there, we visited family in the Indianapolis area.  Our stops included the Indiana State Museum, which has a modest Civil War display.  Among the artifacts is the Medal of Honor awarded to Corporal Andrew J. Smith, 55th Massachusetts Infantry, for actions at Honey Hill, November 30, 1864.

And there will be a follow up post on that subject.  Interesting how the Charleston-Savannah theater of war keeps circling back into my line of sight!

The rest of our tour was a detour off the Civil War subjects (with the exception of dinner with a friend, fellow blogger, and Civil War historian of note).  The Aide-de-Camp enjoyed this sort of stuff:

However, you Civil War-types are perhaps less enthusiastic…. Plenty of blog posts should I start a new blog entitled “To the Sound of Pratt & Whitney”.

While relaxing, the trip also gave me time to consider future blog posts for “To the Sound of the Guns.”  As mentioned above there are several “trip reports” and other topics for posts.  But more importantly, I had the opportunity to consider which threads to follow as I evolve this blog into the post-sesquicentennial.  Not saying there will be changes, but rather the promise that there will continue to be content in the weeks and months (and hopefully years) ahead.

2 thoughts on “Refreshing furlough… Now a return to work”