Through the opening weeks of 1865, Major-General William T. Sherman worked out several details that would enable success in his planned campaign through South Carolina.  Logistics and the line of march were particulars which needed attention.  And at the same time, Sherman had to figure out how to leave Savannah in good hands.  Based on the examinations by Captain Orlando Poe, Savannah needed a division-sized garrison.  The question was not if Savannah would be abandoned (as Atlanta), but how to provide that garrison.

Sherman preferred to keep his force intact.  At first he suggested the invalid men from those corps, then consolidated at Nashville, might provide the manpower.  But their numbers were not sufficient and the resources to move and organize them was prohibitive.  The Department of the South, under Major-General John Foster, barely had the manpower to hold the coastal garrisons as it was, much less take on Savannah.

One possible solution to this manpower issue lay in the contraband camps.  But Sherman seemed reluctant to go there.  In a telegram to Lieutenant-General Ulysses S. Grant on January 5, 1865, Secretary of War Edwin Stanton suggested:

I think it would be useful if you would write to Sherman, urging him to give facilities to the organization of colored troops.  He does not seem to appreciate the importance of this measure and appears indifferent if not hostile.

Catching Stanton in route to Savannah for a meeting with Sherman, Grant communicated later that day:

I am just in receipt of a letter from Sherman, asking me to re-enforce Foster so that he will not be compelled to leave a division of his army there. Please say to Sherman that I will send the division now embarking at Baltimore. They probably will reach him two days after you do. I wrote to Sherman some time ago to direct Foster to organize negro troops to do garrison duty. Please say to Sherman that if Foster will go to work and organize colored troops they can garrison the forts and islands, leaving all of his white troops for Savannah and the camp at Pocotaligo, enabling the division which I now send to return in the spring, if necessary.

So the temporary solution was to move a division from the Shenandoah Valley to Savannah.  That pulled a “playing piece” off the very active portion of the board to an inactive one.  Beyond that short term solution, Grant preferred to see US Colored Troops organized for the garrison.  And as Grant wrote to Stanton, the process was already in motion.  On the last day of December,  Army Chief of Staff Major-General Henry Halleck had directed Foster to start organizing military units from the contrabands at Savannah.  On January 8, Foster received that message and responded:

I have the honor to acknowledge the receipt of your letter of the 31st ultimo in regard to the organization of all the able-bodied negroes brought in by General Sherman’s army to this department for service in this department, and beg leave to express my gratification at this decision, because I need troops for garrison duty very much, and I can soon make these men available for that duty. I have several officers whose military excellence and gallantry fully entitle them to promotion to be officers in the new regiments. I anticipate no difficulty whatever in organizing these regiments and in obtaining most excellent officers. I will report the appointments, as soon as made, for confirmation by the President. In obedience to your direction, as soon as the letter was received I submitted it to General Sherman, who desired that I might carry out the order as soon as he moved and the city was turned over to my command. Until such time he desired the services of all the negro men in the quartermaster’s department in loading and unloading vessels and in other preparations for a forward movement.

Some of the troops recruited at Savannah went into the ranks of existing units.  But the main fruit of this effort was the 103rd, 104th, and 128th USCT regiments.  Three regiments to replace a division?  And formation of those regiments required more than a letter to Washington.  None of the regiments were mustered in before March.  However, all three regiments remained active through 1866, preforming duties during the early reconstruction period.

During the march across Georgia, a problem which Federal commanders dealt with on a daily basis was traffic control.  Sounds simple, but just keeping the regiments and wagon trains on the right road was a critical task.  Given the bad roads and poor maps, a mistake at a crossroad might delay a column for a day or more.  As the Fifteenth Corps was often spread out with each division covering its own line of march, the officers there were keen to prevent similar problems as they planned for a march through South Carolina.  So on this day (January 6) in 1865, Fifteenth Corps headquarters issued General Orders No. 3:

During the approaching campaign the following instructions will be observed:
1. Whenever the whole corps moves upon the same road the trees along the line of march will be blazed with a cross +.

3. If more than one division, but not the whole corps, move upon the same road, the corps cross will be blazed on the trees, and the division mark, according to the divisions present will be added thereto. For instance, for the First and Fourth Divisions moving on the same road, a cross with a dash above and on left-hand side |+. For Second, Third, and Fourth Divisions moving on same road, corps cross with dash on right and left hand side and under it |±.

Division commanders are charged with the promulgation and execution of this order.

As this loses something in the translation of non-standard characters, allow me to offer this copy of the order as it appears in the Official Records:

The system of signs appears complex at first glance. But after you digest it for a moment, it does make sense.  A “bar” is for a division’s route, and each division has a particular arm of the cross assigned.  Two divisions on the same route receive two bars.  The orders didn’t break down the march for individual brigades, however.

My pal XBradTC will likely chime in at this point to mention the modern equivalent.  Today’s military is more concerned with operational security and such while on the march.  So routes have code names or numbers assigned instead of designating actual units on the move.   Furthermore, with motor vehicles, the military is concerned with marking the directions at intersections.  FM 3-19.4, Military Police Leaders’ Handbook, offers examples of those: 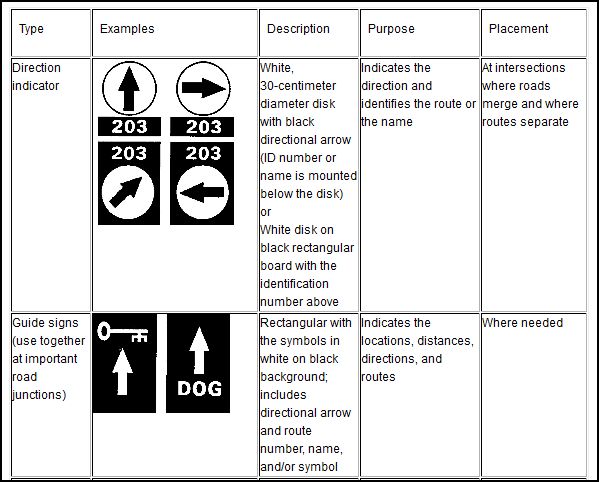 There are much, much more examples offered which take into consideration all sorts of scenarios (detours, bridge weights, road width, blackout lights, etc.).  But that’s the simple version – route numbers (“203”), symbols (“key”), and code-names (“Dog”).

Reading the order as written, it is not clear if the Federals would simply paint the blazes on the side of the trees or cut the appropriate cross into the tree bark.  I suspect the former.  And I’ve often wondered how many trees across South Carolina and North Carolina were “blazed” as such.

The order was one of the last issued by Major-General Peter Osterhaus as the commander of Fifteenth Corps.  Two days later, Major-General John Logan returned from leave to resume the duties.