I’m going to steal an apt description of events from Mark A. Lause in regard to October 1-2, 1864 – Major-General Sterling Price’s Missouri Campaign reached its high water mark.  Lause considers it the high point for the entire war in the Trans-Mississippi.  And in one aspect, one can make that case.

The town of Franklin (now Pacific), Missouri was an important railroad junction about 30 miles outside of St. Louis, the city.   And just beyond the town was the western border of St. Louis County.  For all practical purposes, Franklin was the last point to block Price’s advance short of St. Louis itself. 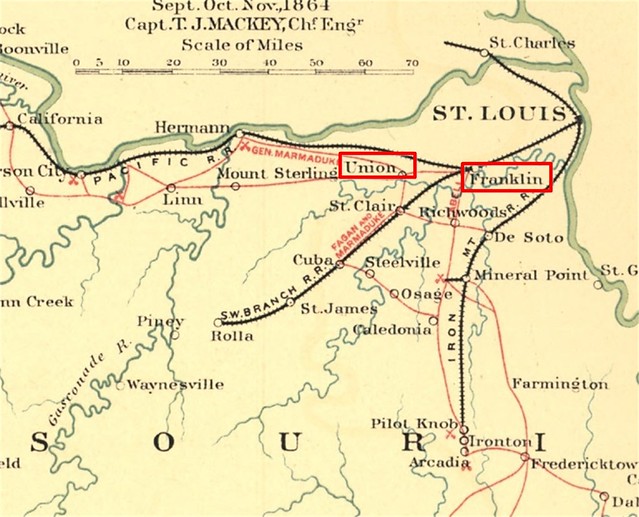 Just as important to its proximity to St. Louis, Franklin was were the Southwest Branch Railroad, which connected Rolla and central Missouri to St. Louis, and the Pacific Railroad, linking westward to the state capital in Jefferson City, met.  If the Federals needed to shift troops to meet Price’s columns, they would transit through Franklin.   In short, those railroads made Franklin very important if the Federals planned to hold Missouri.

With the importance of Franklin in mind, Price dispatched a brigade of cavalry under Brigadier-General William Cabell.  The Confederates arrived early on the morning of October 1 and brushed past a Federal garrison stationed there.  Cabell’s troops went to work destroying the railroad, the depot, and several nearby bridges.  Most of the rolling stock and stores had already moved east to St. Louis, so there was little of material gain.

However, that evacuation of rolling stock had actually worked against the Federals who were pushing a brigade under Colonel Edward Wolfe.  His command was the Third Brigade, Third Division, of Major-General Andrew J. Smith’s Sixteenth Army Corps… that is to say, a portion of the Union Army’s “Fire Brigade” in the Western Theater.  And Wolfe’s men were being thrown right into a fire!

While still on the train, Wolfe’s men ran into the Confederate lines just east of Franklin.  Confederate artillery shelled the train and the troops.  Despite the confusion of having to dismount under fire, the Federals managed to get organized.  The trail regiments formed and soon the Confederates were pressed out of the town. The battle lasted only a few hours and casualties were about a dozen on each side.  But the damage was done.

Reporting to St. Louis later in the day, Wolfe said, “They have plundered the town and destroyed considerable railroad track. I have no doubt the Meramec bridge in front has been destroyed.” During his stay, Cabell destroyed four bridges and a large section of track.  With the railroad down, the direct link to Jefferson City was severed.  Price had effectively split the Federal defense of Missouri.

While that was going on, further to the west Price moved towards the town of Union (aptly named, eh?).   After the Confederates brushed aside a small force of Missouri militia, they occupied the town where Price established headquarters – Camp No. 33 in the itinerary of his army.  There, with his force still numbering at least 10,000 (though what portion of which was actually in arms will forever remain a question), Price could indeed threaten St. Louis and perhaps do a little more damage.

Adding weight to Price’s threat, the Missouri Commander of the Order of American Knights, John H. Taylor, issued a bold proclamation on October 1:

Sir Knights: Morning dawneth. General Price with at least 20,000 veteran soldiers is now within your State. Through your supreme commander (and with the approbation of the supreme council) you invited him to come to your aid. He was assured that if he came at this time with the requisite force you would co operate and add at least 20,000 true men to his army. He has hearkend to your prayer and is now battling for your deliverance. …

All able-bodied men of the O. A. K.s are hereby called upon and required to render military service in behalf of our cause. All true knights will yield prompt obedience to the orders and commands of General Price. Meantime do all possible damage to the enemy. Seize all arms and munitions of war within your power. Take possession of and hold all important places you can, and recruit as rapidly as possible. …. You joined the militia that you might the better protect yourselves under Radical rule. Now prepare to strike with the victorious hosts under General Price and aid in the redemption of the State. …. (Read the full proclamation here.)

This statement seemed to confirm earlier warnings by Major-General William Rosecrans regarding the secret organization.  And certainly Price was meeting one of his objectives – adding more men to his command, by way of recruitment… or more accurately, re-recruitment.

On the Federal side, Rosecrans assessed the force protecting St. Louis as

General Smith’s 4,500 infantry and the mounted force we could raise, the Seventh Kansas, just in from Memphis, part of the Thirteenth Missouri Volunteer Cavalry… and recruits of Merrill’s Horse, hastily mounted and organized, a total of 1,500 men….

On paper at least, Price had an opportunity.  But there at Union, Price hesitated.  He had some wild indications of the Federal strength in St. Louis to number upwards of 24,000.  And at the same time, he did not want to call out for more Missourians to join his army, fearing that would add a long line of civilian refugees just when the force might need to march fast.

Instead of moving on St. Louis, Price turned his army along the Missouri River, where the state capital of Jefferson City and, to the north of that, the counties of Little Dixie were within grasp.