Some years ago I was visiting Cedar Creek and stopped in the visitor center there.  This was before the national park was established there, but still the battlefield organization maintained a good post.  As part of my visit, I took in the orientation video.  As the program covered the events which lead up to Cedar Creek, the Burning Raids received due time.  When the narrator mentioned the number of barns and farms destroyed by the Federals, a couple to my right let out a very emotional gasp.  Later, after the movie was over, they began pressing the guide for more details about the raids.  The docent explained that as part of the raids not only did the Federals burn down barns and other buildings, but they took livestock, crops, and other property.  At some point, one of them reached a conclusion to all this – “All that burning and stealing was wrong.  It was unnecessary.  A crime!”  I’ve learned long ago to avoid such lead-ins and leave the tending to those behind the desk with name-tags.

I would have liked to have interjected, saying to the effect, “I’m from Missouri, and both sides burned our state practically to the ground.”  After all, it was Missouri’s “hard war” that served as a precursor to that experience in Virginia.  But I doubt that would have been constructive.  Better yet I might have brought up many stories from South Carolina that demonstrated similar Federal actions and how those were justified at the time.  That, perhaps, would have demonstrated the evolution in Federal approach.  But to best demonstrate that point, I’d have to avoid the “generalizations” and focus on some “specifics.”  And that’s what is often lost in such conversations.  So let’s talk some brass tacks on this subject today….

One day and 150 years ago, Abraham Miller of Bridgewater in Rockingham County, lost some property.  According to a claim made after the war, on September 29, 1864 a party of Federal soldiers took two horses, a ton of hay, 28 bushels of oats, 10 bushels of corn, and two saddles ($241.86 in 1871 estimates). 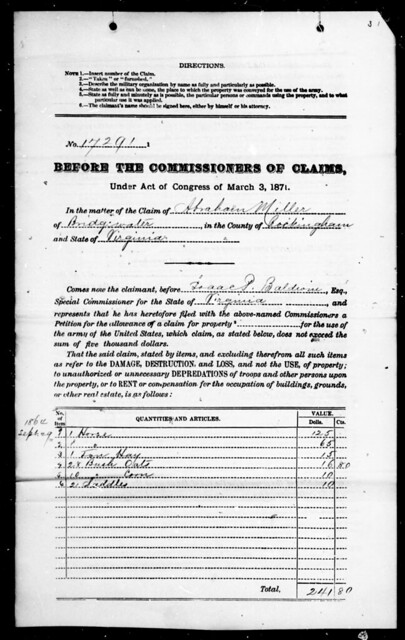 I went to the Cavalry Camp of General Custer (attached to General Sheridan’s army) on business and while there saw the two horses charged in the said petition in their possession. The horses were accounted as Cavalry horses and a Captain whose name I did not learn was on one of them.  I saw the hay, corn, and oats of the claimant taken by the troops of General Custer at about the same time.  I cannot say how much exactly of the said supplies were taken, but I am fully convinced that they took at least as is charged in this petition.

So a bunch of “Yellow Hair’s” troopers made off with Abraham’s horses, taking with them some supplies without so much as voucher or Yankee greenbacks in return.  They just “took” it all.

With that little bit of information, should we consider Abraham just a farmer trying to make his way in the middle of a war?  Perhaps it would be easy to cast him as a Charlie Anderson (there’s that cultural reference again, Robert).  But we should also consider that Abraham had done business with the Confederate army at several times during the war.

Abraham appears in the Confederate Citizens Files with, while not a substantial amount of business, enough to establish his association.  In June 1862, he sold a small amount of corn to Confederate authorities on two separate invoices.  The total was just over $30. More substantially, in February 1863, he sold $179.50 of bacon. 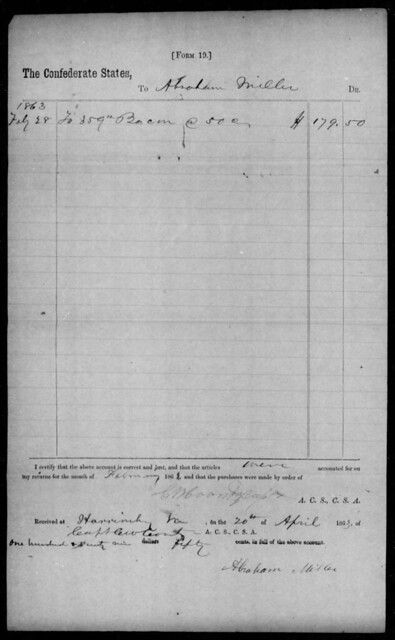 Then in March 1863 he sold 28 bushels of wheat to the Confederate army.  Sure, less than $250 in transactions all told in the record – and that assumes the records are complete.  But we are not trying to say Abraham did business that rivaled Tredegar or other major businesses.  Rather this does establish Abraham as a person supplying goods to the Confederate Army, in context of what happened on September 29, 1864.

So did the Federals have reason to be concerned, had they left Abraham’s farm alone, that he would sell or otherwise turn those goods over to the Confederates?  Let’s go back to the records.  First there is this: 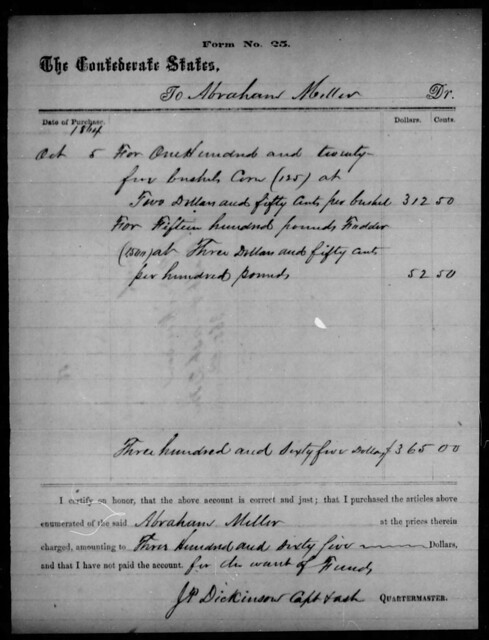 But wait… didn’t Sheridan’s guys burn all there was?  Apparently not!

A few days later, Abraham sold 61 bushels of corn and 1200 pounds of hay to another Confederate quartermaster: 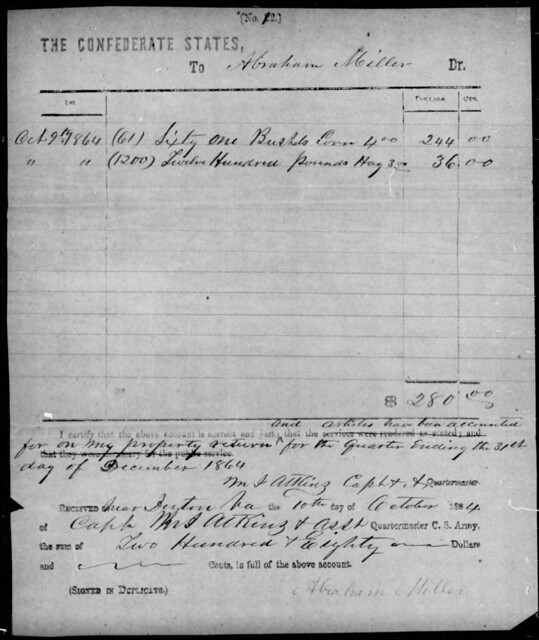 The total there was $280.  And there is a strike through at the bottom “and that the articles have been accounted for on my property return for the quarter ending the 31st day of December 1864.”  I don’t know exactly what to make of that last, other than to say again that Abraham Miller continued to do business with Confederate authorities.

I would caution, however, that these receipts are just part of the story.  What we don’t know is the back-story.  Was Abraham just doing business with the Confederates because he needed the money?  Was he pressured?  Did the presence of Federals lead him to sell it all off, in hopes of getting at least something?  All good questions to which there are few clues in the records.

But one thing we can say, given that Abraham did sell off what he owned in October 1864, the Federals did have justification.  The case is clear: anything left behind in Abraham’s possession would – and did – end up in Confederate hands.

Now was it legal for the Federal troops to “take” what was Abraham’s?  Keep in mind there was no “Geneva Convention” in 1864.  There was instead General Orders No. 100, also known as the Lieber Code.  Article 15 of that order read:

Military necessity admits of all direct destruction of life or limb of armed enemies, and of other persons whose destruction is incidentally unavoidable in the armed contests of the war; it allows of the capturing of every armed enemy, and every enemy of importance to the hostile government, or of peculiar danger to the captor; it allows of all destruction of property, and obstruction of the ways and channels of traffic, travel, or communication, and of all withholding of sustenance or means of life from the enemy; of the appropriation of whatever an enemy’s country affords necessary for the subsistence and safety of the army, and of such deception as does not involve the breaking of good faith either positively pledged, regarding agreements entered into during the war, or supposed by the modern law of war to exist. Men who take up arms against one another in public war do not cease on this account to be moral beings, responsible to one another and to God.

The logic – if Abraham’s hay, corn, fodder, and horses could be used by the Confederates, then the Federals could take it in order to deny those resources to their enemy.  It may not sound nice.  But such is the nature of “military necessity.”  The last line, of course, offers some words to caution against extremes.  Cited constraints were agreements made between combatants or other conventions of war.  Still, the object remained – Abraham’s property was a legitimate target.

You may ask if Abraham was reimbursed for his loss.  The board reviewing his claim had this to say in 1871: 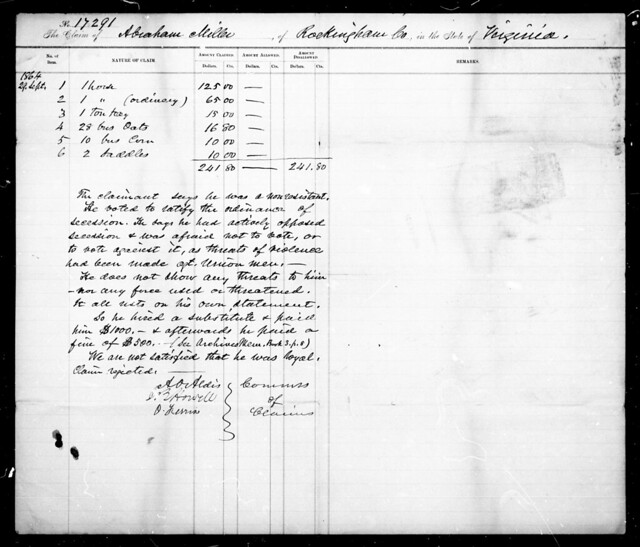 The claimant says he was a [non-contestant?].  He voted to ratify the ordnance of secession. He says he had actively opposed secession & was afraid not to vote, or to vote against it, as threats of violence had been made agt. Union men. He does not show any threats to him – nor any force used or threatened.  It all rests on his own statement.

Let me close by recommending to those who are looking for a fresh perspective on the Burning Raids, a recent post by Robert.  More than barns, mills, and grain were destroyed during those days of autumn.