Back in May I wrote about a “suggestion” from Brigadier-General Henry Hunt in regard to firing 12-pdr Light Field Guns – Napoleons – as mortars.  Hunt inquired with Colonel Henry L. Abbot, 1st Connecticut Heavy Artillery and the presumptive commander of the siege artillery to support the Army of the Potomac, about testing Napoleons dug in to fire at high angle.  In that post, I remarked that Abbot “… had not gotten around to trials of the Napoleons as mortars.  Nor would he.”  A few days after the request, Abbot moved to Fort Monroe to join the Army of the James.  Well, I have a correction to make!

Commenter John Wells offered “a vague recollection of reading in some period artillery manual or other that the Napoleon could be reversed on its carriage to allow high angle of fire “mortar practice”” At the time, I didn’t recall such, but noted there was mention of siege howitzers employed in that manner.  But John’s comment, coming from someone knowledgeable on Civil War era weapons, had me double checking. Sure enough, a passage from Abbot laid out those experiments with some detail.  John was spot on!

Abbot’s Siege Artillery in the Campaigns against Richmond is like a “practical guide to heavy artillery” and filled with many fine points of technical nature.  In regard to Napoleons mounted for use as mortars, he wrote:

The advantages of vertical fire under certain circumstances are so great, that in May, 1864, a few experiments were made, under my direction, by Captain [Wilbur F.] Osborne, 1st Connecticut artillery, to test the light 12-pounder gun as a mortar.  They indicated that it might be thus used when mortars could not be procured; but the expedient was never necessary in the siege of Richmond.

So, while Abbot could not fill Hunt’s request personally, one of his capable subordinates did.  But while Hunt suggested simply digging in the trail of the cannon to provide the necessary elevation, Osborne worked the weapon in a different manner:

The carriage was dismounted and the gun reversed in its trunnion beds so as to point over the trail. Two parallel skids laid in a direction perpendicular to the parapet and separated by the proper interval, supported the axle at such a height as to allow the breech to be depressed between them sufficiently to give an angle of elevation of 45º to the piece.  The breech rested on a kind of quoin, and it was found necessary to tie the trail down with the prolonge when the gun was fired. With five ounces of powder, giving a range of about 1600 yards, the strain upon the carriage was inappreciable.  Solid shot (weighing 12.12 pounds) were used; and with charges of four ounces and less, the sabot was not detached until striking the ground.  With very small charges the sabot passed below the vent, but the friction primer always ignited the powder.  These experiments were made in grate haste, at the request of General Hunt, chief of artillery, army of the Potomac, only three days before starting for the field, and no very extended trial was practicable.

Abbot provided a table showing the results of these trials:

For comparison, the standard Napoleon load for a solid shot in horizontal fire was 2.5 pounds, giving 1,680 yards at 5º elevation.  So almost the same range, with a lot less powder.  But that’s mortar powder instead of the standard grade cannon powder, mind you.  The ranges cited were for solid shot.  Using shell, I would think the ranges would, as they did for horizontal fire, drop off to around 1,300 yards.  And shells were more practical for vertical fire.

The practical issue with the arrangement used in the tests was the modification of the weapon mounting.  Dismounting a 1,225 pound bronze gun was no trivial matter in the field.  And for the field artillerists, who would need to employ the gun in most cases for direct, horizontal, fire, this would mean two periods of time in which the gun was unavailable for use.  Not to mention the need to bring along wood for rails, as tested by Osborne.

Abbot went on to record similar tests using the 8-inch siege howitzers, which he was particularly fond of (and Hunt was less so):

Similar experiments with an 8-inch howitzer were conducted by Lieutenant Colonel [Joseph A.] Haskin, in charge of the defenses north of the Potomac, in October, 1863. The following are the results obtained by him and communicated in the manner above described.

The tests took into account the differences between the older Model 1841 and new Model 1861 versions of the howitzer:

The variation in range between the two models, of which the bores differ only in the form of the chamber, (elliptical and gomer,) will be noticed with surprise. It accords with my own experiments, soon to be given, with the new and old model mortars. The absolute value of the range shows that a considerable economy in powder wold result from using the howitzer instead of the mortar, but in service this advantage would be more than balanced by the greater inconvenience of loading and pointing.  It is, however, a fact worth remembering that vertical fire, in cases of necessity, can be obtained readily and effectively from guns and howitzers.

That last remark is indeed “worth remembering.”  Within fifty years, weapons designers began working with advanced carriages, using stronger steel frames and pneumatic recoil systems, to allow high elevations.  This revolutionized the use of field artillery.  From primarily a direct fire weapon in the Civil War, by World War I the artillery was more often than not employed against targets unseen by the gunner… and at high angles of fire.  In that light, the Federal experiments were steps in an evolutionary course which lead to today’s high powered howitzers: 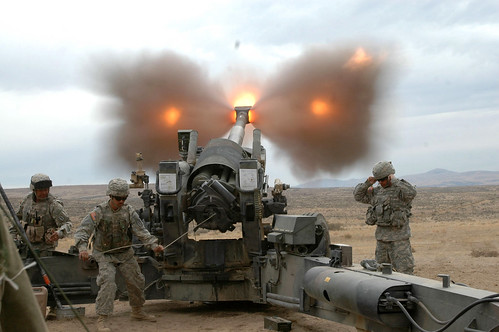 (Citations from Henry L. Abbot, Siege artillery in the campaigns against Richmond: with notes on the 15-inch gun, including an algebraic analysis of the trajectory of a shot in its ricochets upon smooth water, Washington, D.C.: Government Printing Office, 1887, pages 23-25.)

One thought on “Napoleons (and siege howitzers) as mortars: More data and range tables!”