One of several interesting facets to the Christmas Day fighting at Legareville is the Medal of Honor awarded to Robert Blake.  The particulars for that Medal of Honor read:

Citation: On board the U.S. Steam Gunboat Marblehead off Legareville, Stono River, 25 December 1863, in an engagement with the enemy on John’s Island. Serving the rifle gun, Blake, an escaped slave, carried out his duties bravely throughout the engagement which resulted in the enemy’s abandonment of positions, leaving a caisson and one gun behind.

As mentioned yesterday, Blake’s was one of four awarded to crew-members of the USS Marblehead for actions on that day.  All four were issued under the same general orders.  While the other three citations indicate rank and assigned post, Blake’s identification was simply “contraband.” 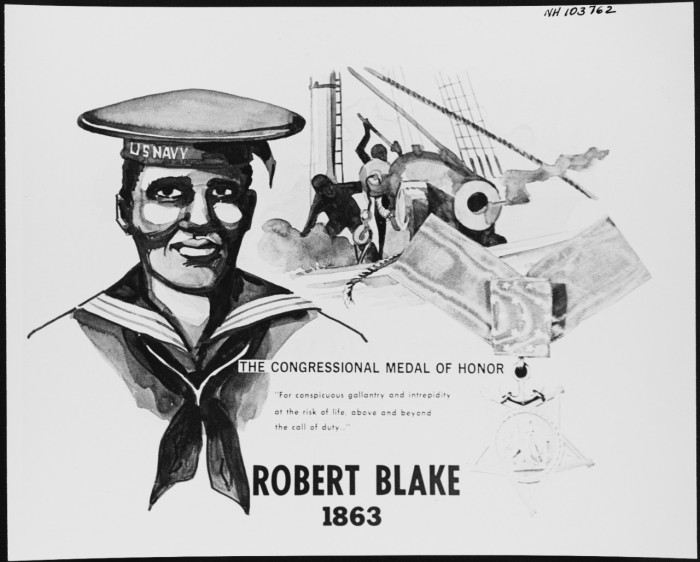 The timing of the orders meant Blake was not only the first African-American to receive the Navy’s version of the Medal of Honor, but also the first African-American to receive the award in any service.  Sergent William H. Harney, 54th Massachusetts, is often cited as the first such award, for his actions during the July 18, 1863 in the assault on Fort Wagner.  However, Harney’s Medal of Honor was not approved until 1900 – a gap of 37 years.  Blake’s was awarded a short four months after the action.

But while much is known of Harney and his life, we have precious few leads on Robert Blake.  We can trace Robert Blake back to an incident in June 1862.  A naval force under the command of Commander George Prentiss worked up the Santee River with the aim to destroy railroad bridges upstream.  Heading up the river, the expedition passed the plantation of Aurthur  M. Blake without incident (red arrow on the map below). The Confederates had used the plantation as a base for patrols on the Santee and forces protecting the blockade runners using the river.  But apparently any garrison there retreated when the gunboats arrived.  Finding the river upstream too shallow for the ships to reach the targeted railroad bridge, Prentiss returned.

On June 26, 1862, when passing the Blake Plantation the second time, his ships took fire.  In response Prentiss returned fire and landed a party to chase away the Confederates contesting passage.  Considering the plantation a legitimate military target, due to the use of the buildings by Confederates, Prentiss had the house and mill burned.  His landing party brought back 100,000 bushels of rice.  And… important to the story of Robert Blake… some 400 slaves made their escape to the steamers.

Arthur Blake, of course, was none too happy about the destruction of his plantation and loss of his slaves.  The 1860 census indicated he owned $150,000 in real estate and $350,000 in personal property.  In May 1863, Arthur issued a claim against the Confederate government for damages totaling $288,375.

Arthur offered a full list of the 402 slaves he recorded as “lost” due to the action.  Among those was a 28 year old “Robert” valued at $1,100.  (And for what it is worth, in 1871 Arthur submitted a nearly identical list along with a claim to the U.S. government for the loss of slaves and other possessions during the war.  That claim was denied.)

Prentiss indicated he landed the escaped slaves, now contrabands, on North Island, between the sea and Winyah Bay, outside Georgetown, South Carolina.  The contraband camp established there soon grew in number as more escaped slaves joined the 400.  Fearing a Confederate raid, the Navy relocated the camp, which had grown to nearly 2,000, to Hilton Head in March 1863.

There’s no clear record of Robert Blake enlisting in the Navy.  I suspect sometime prior to the relocation of the contraband camp he signed on to serve on one of the ships operating off the South Carolina coast.  I’ve yet to locate any papers showing his enlistment.  And maybe he didn’t enlist, but rather volunteered to work as a servant.  After all, that was his station on Christmas Day 1863 off Legareville in the Stono River.

Consider the places I’ve mentioned within the narrative thus far.  The Blake Plantation, though some fifty miles north of Charleston, was in Charleston County.  And Legareville, some twenty miles south, is likewise in Charleston County.  Robert Blake was fighting within the county from which he’d escaped as a slave.  Certainly a “legality” which would not escape notice if the Marblehead‘s crew been captured.  And perhaps a little extra motivation for Robert Blake that morning.

Within four months of that incident, Robert Blake’s military career reach its high point.  He was ranked a seaman.  What’s more, a seaman with the nation’s highest military award.  Sadly, I find no record of Blake’s subsequent service and eventual fate.  But I can say the details we know of his life speak to a broad spectrum of experience – from slave, to contraband, to sailor, to hero.