In earlier posts, I’ve detailed the fortifications built through the late summer and early fall around Charleston, particularly James Island and Sullivan’s Island, as Confederate leaders adjusted to the Federal occupation of Morris Island.  At points I alluded to the complaints by Confederate officers regarding labor shortages. If one counted the actual shovel-fulls of dirt, the majority of the labor employed in these projects was from black hands – impressed, volunteered, or slaves lent, or hired out, by their owners.  This workforce, as mentioned before, presented several problems, some of which were exacerbated by the war situation.

On this day (November 25) in 1863, Major William Echols, an engineer posted at Charleston, reported the status of negro labor actively employed around Charleston.  He began by noting issues with impressing agents across South Carolina.  Only three of the five positions in the department were filled.  Echols simply stated, “Some of the agents have done their duty.”  He continued with a tally of negro laborers received from state calls and by way of the agents (volunteered or impressed).  The total from state calls over the months from July to November was 6,250. Under the “impressed or volunteered” heading, Echols recorded 3,150.  Echols then provided the laborers employed at the date of the report:

There are now at work on the fortifications 4,041 negroes, of which number 662 were either impressed or were volunteers, and 3,379 received by regular call.  Two thousand two hundred and eleven, in consequence of sixty days’ service, are entitled to discharge.

If more energy is not infused into the system of impressment, it will be necessary, in order to keep the working force up to 3,500 effective hands, to retain the negroes now here, even beyond the sixty days recently ordered. Most of these negroes are thinly clad, and it is of importance they should be relieved by vigorous impressment, as the State authorities fail to supply the requisitions made upon them of monthly reliefs of 2,500 hands.

Keep in mind, the work for which these men were detailed (impressed… hired… forced… you pick a verb) was not teamster duties or some detail loading supplies.  These men were put to work at posts which included James Island, Sullivan’s Island, and Fort Sumter, where Federal shells landed in abundance on a daily basis.  Several journal entries from Fort Sumter mention wounding or deaths among the labor force, but with no other details.  The work was by no means safe, and in some regards presenting even more risk than that taken by soldiers at the same posting.

At the same time, the proximity of the work to the Federal lines offered the chance the labor force might escape.  One such example, documented in the Confederate Citizens Files, involved two slaves owned by Nathaniel Heyward (from Pocotalio, by the way) : 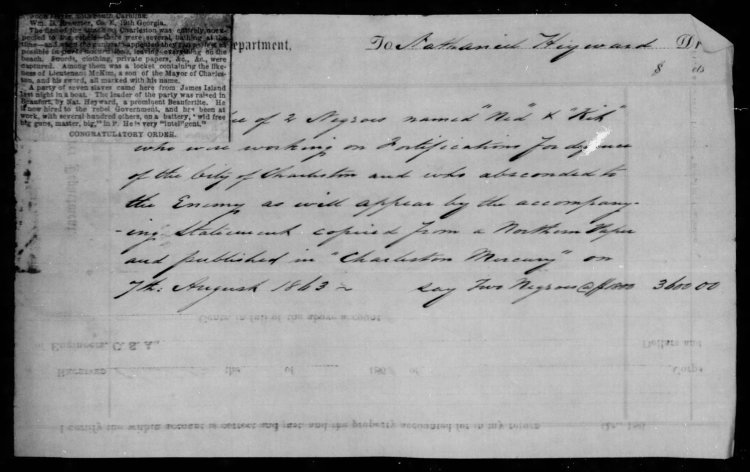 Heyward included a snipped newspaper report, which he referenced in a claim to the Engineer Department:

August 7:  For the value of 2 Negroes named “Ned” & “Kit” who were working on fortifications for defense of the City of Charleston and who absconded to the enemy as will appear by the accompanying statement copied from Northern Papers and published in “Charleston Mercury” on 7th August 1863 ~ Say Two Negros @ $1800 – $3600.00.

According to a statement provided by a Confederate officer on James Island, the escape occurred on July 16, 1863.  The claim went through both Echols and Harris, the engineers responsible for the labor details.  Since the required sum could not be taken from engineering funds, the claim reached General P.G.T. Beauregard’s office.  His response went on the cover to the claim:

Yes, I selected this claim because of that date – November 26, 1863.  The snip above includes only a portion of the response.  In short – any payment had to be authorized by the Confederate Congress.  Heyward would need to gather all the particulars and make his case there. Though Beauregard did call upon his officers to support Heyward.

Consider the cross threading between the Pocotalio raid of November 24, Echols’ report on November 25, and the disposition of Heyward’s claim on the 26th in evidence here.  Three unrelated events. Yet with enough in common to weave a narrative fitting a historical marker.