When discussing Batteries Rosecrans and Meade earlier, I held off detailed analysis of Battery Meade photographs.  Let me catch up using a digital copy of a photo of Battery Meade from the Hagley Museum and Library, Haas & Peale collection:

The photographer took this standing to the left rear of the battery, about where the base of the first “A” in “Battery Rosecrans” is on the map:

The photographer got both of the 6.4-inch Parrotts of the battery in view, with part of the crew conducting “business.”

Because he carried a haversack, I’d propose this man was the gunner and he is working at the vent.

On the other Parrott, crewmembers stand ready with handspikes.

Those are are wooden shod handspikes used for the brute force leverage against the carriage.

On the other side, a soldier wearing a rather loud, relatively speaking, striped shirt holds an iron maneuvering handspike for use in the wheels on the wrought iron carriage.

At the rear of the guns we see another budge barrel.

In fact there are two.  And this fellow looks really excited to be at that budge barrel in this photo.  Can you read anything in the expression on his face?

But the box at his feet offers a riddle: 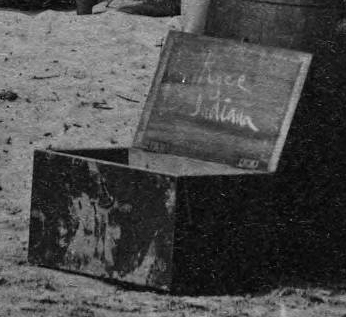 “Ryce Indiana” maybe?  Makes no sense to me.

But since this is “Sound of the Guns” we need to look in more detail at the artillery stuff.  Notice the projectiles laying to the left of the battery.

Look close and you can see the sabots on the base of the projectiles. And I assume those are shells, as that’s what Battery Meade was supposed to fire according to orders.

The left side gun offers a good study of the wrought iron carriage.

In the front are the returning wheels, used to push the gun back onto battery using the iron handspikes like Mr. Striped Shirt is holding.  To the rear is a chock that served to keep the carriage truck on the transom and arrest movement.

Looking below the transoms at the traversing wheels, notice the holes that allowed the crew, using the handspikes, to traverse the gun.

Also notice the iron race on which the wheels rested.  This was part of the traverse circle, or half-circle, laid down to allow movement.  Can’t have the gun rolling about in the sand with those small wheels.

Men from the 3rd Rhode Island Heavy Artillery manned Battery Meade, along with a detachment from the 100th New York Infantry.  First Lieutenant Henry Holbrook commanded the battery, until killed by a shell fragment on August 19, 1863.  First Lieutenant Albert E. Greene replaced him.

Back behind the gun is a bit of debris.  That looks to be a shell fragment.

Perhaps what’s left of a prematurely exploding Parrott shell?  Or maybe something flung at the siege lines by the Confederates?  From the perspective of the camera lens, peering back 150 years into time, that fragment is just something in the way of another wise clean, well kept battery.  I’d like to think the soldiers left it there as a reminder of the danger of their “routine” business.  However, this photo was taken after the conclusion of actions against Battery Wagner. In which case, that fragment may just be a photographer’s prop.

One thought on “Battery Meade – up close and in detail”