Yesterday I left off mentioning a shortfall of guns in Jackson’s Second Corps. The batteries of the corps had 95 of 116 guns required (according to General Pendleton). And of that total, roughly a third were obsolete 6-pdr guns and 12-pdr howitzers. My pal Robert Moore was quick to inquire about the pace of re-equipping that winter. I think one of the receipts filed with J.R. Anderson & Company’s Citizens File offers a glimpse at that. 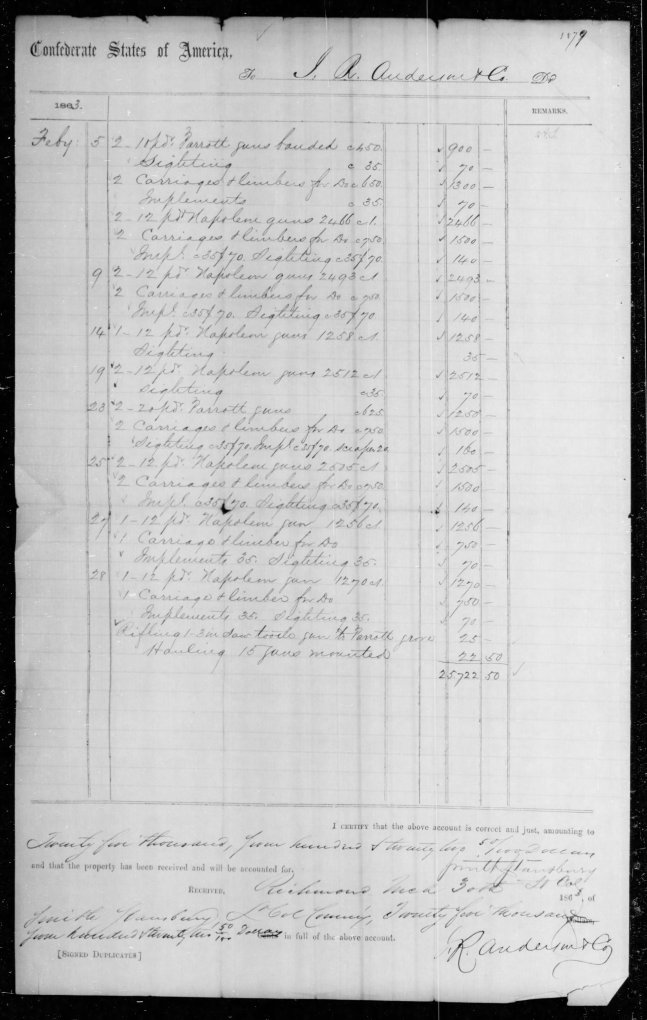 This receipt covers deliveries from Tredegar to the Richmond depot. Yes, you’d have to zoom in close to read all the entries. So let me list the highlights:

That later entry appeared to be a modification on an existing weapon -switching from saw-tooth rifling to the flat lands and grooves used for Parrott guns. So sixteen field pieces, plus one recycled rifle. A gun delivered about every other day (actually just a little more than that, but let’s not split hairs).

As mentioned, these guns went from the foundry to the Richmond depot. The bottom of the receipt includes particulars worth consideration.

Tredegar received credit for $25,722.50 in ordnance, equipment, and services on this sheet (and of course this is only part of the company’s business for the month). The officer acknowledging delivery is Lieutenant Colonel Smith Stansbury. Now Stansbury was not detailed directly to the Army of Northern Virginia. But he was often involved as ordnance and equipment shuffled from the depot to the army defending Richmond. While I cannot say for certain that all those guns shown on the receipt went to the Army of Northern Virginia, there’s enough circumstantial evidence to say many of them did.

So let us assume all these guns were earmarked for the Army of Northern Virginia. Perhaps even further narrow down the focus just to the Second Corps so we can play with numbers. Jackson needed 21 guns just to get the numbers up. Then 28 more guns to replace the obsolete types. Furthermore, the gunners would probably want to replace a few of the “Richmond” 3-inch rifles with better, more dependable types. Figure then Jackson’s corps needed 55 to 65 guns new guns. Given Tredegar’s delivery rate from February, Jackson’s Second Corps needed five or six months to receive the desired quantity and types of guns.

And that is just one corps in *that* army. Consider how many other Confederate batteries, across the critical theaters of war, needed Parrotts, Ordnance rifles, and Napoleons.

For the next post in this thread, I’ll look at the other particulars of Dandridge’s report.

3 thoughts on “150 years ago: Tredegar supplying field guns to the Confederacy”