On this day (February 13) in 1862, a Federal battery along the Savannah River fired upon a Confederate steamer Ida.  While not stopping the steamer, the presence of the batteries prevented any further resupply of Fort Pulaski.  This course of events set the stage for a deliberate siege and reduction of the fort two months later.

As mentioned earlier, plans to isolate and reduce Fort Pulaski formed in December 1861.  Throughout December, General Thomas W. Sherman directed expeditions, supervised by his chief engineer General Quincy Gilmore, to determine what approaches could be used through the marshes in order to close with Fort Pulaski. At the same time, the Navy conducted similar reconnaissances of the inlets and creeks.

Extending from newly acquired bases at Port Royal and Hilton Head, the Federals established forward staging areas on Daufuskie Island just north of the Savannah River’s mouth.  The New River, which curls around the south end of that island, connected to Wright’s River by way of Wall’s Cut.  Wright’s River connected to Mud River, which emptied into the Savannah River above and behind Fort Pulaski.  Light craft could navigate through this maze of tidal creeks to allow passage of men and cannons. 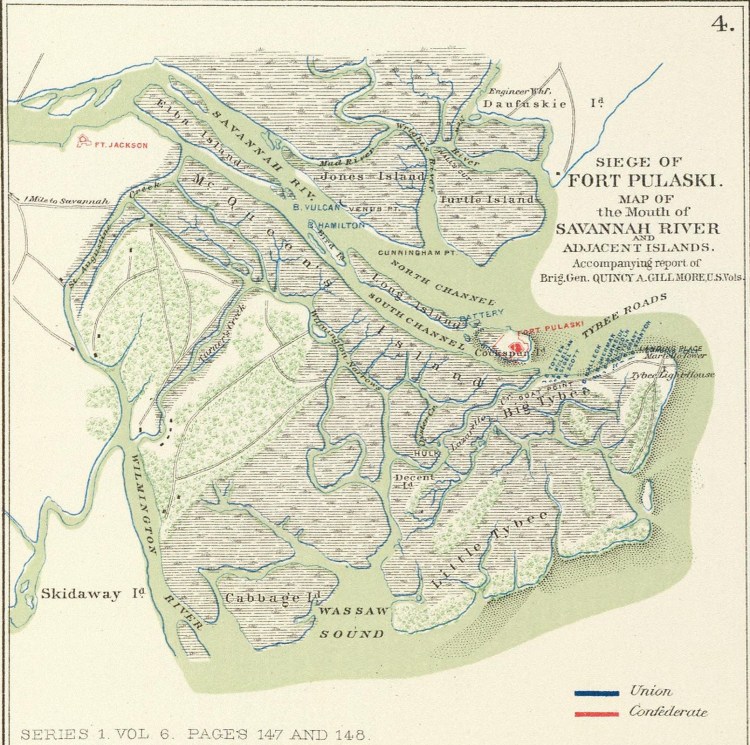 After several reconnaissances, Federal engineers found small sections of ground which, although surrounded by marsh and barely above the high tide mark, could support batteries.  One point selected was Venus Point on Jones Island, along the north channel of the Savannah.  The other was on Bird Island in the middle of the river but covering the south channel.  Well placed cannon at those locations would seal off Fort Pulaski from resupply.  But this was easier said that done.

First the engineers had to clear obstructions left by the Confederates in Wall’s Cut.  Engineers along with a detachment from the 48th New York Infantry worked through the first half of January to clear sunken hulks and pilings to clear the cut.  Although cleared by January 14, delays assembling expedition prevented exploitation of this passage until January 28.  Then a joint Army-Navy expedition moved down the 12 mile winding course towards the Savannah River.

The expedition, commanded by General Egbert Viele, consisted of the 48th New York and two companies of the 3rd Rhode Island Heavy Artillery.  Commander John Rodgers commanded a force of gunboats which escorted steamers transporting the army.  The naval aspects of this operation are interesting on their own, involving brushes with Confederate gunboats, and are well summarized by Rob in a post at the Civil War Navy Sesquicentennial site.  The objective was to place twenty guns – two 8-inch siege howitzers, four 30-pdr Parrotts, three 20-pdr Parrotts, three 3.80-inch James Rifles, and eight 24-pdr howitzers – on Venus Point and Bird Island. The fortifications were named, respectively, Battery Vulcan and Battery Hamilton.

Over the next two weeks, working mostly at night, the Federals established a wharf on Mud River to allow offloading of equipment.  From there they cut a path across the marsh to allow movement of materials.  Most of this work took place at night to avoid any Confederate patrols.  The plan was to transport the guns in flatboats into the Savannah River and to Battery Vulcan.  However weather and tides prevented the Navy from covering this move.  Instead the soldiers worked the guns across the mud flats on the newly cut road.

Through the night of February 10, the troops constructed firing platforms at Battery Vulcan.  The following night they manhandled one 8-inch howitzer, three 30-pdr Parrotts, and two 20-pdr Parrotts along “runways of planks 15 feet long, 1 foot wide, and 3 inches thick, laid end to end” (thus not exactly as depicted above).  The work required the men to traverse knee and waist deep mud, often having to extract the guns which slipped off the planks.  And keep in mind these were not light field pieces.

By February 12, the Federals had the guns in place.  Work then focused on building drainage to ensure the works were not overwhelmed by high tides.  Gilmore’s plans called for a night movement across the Savannah River to Bird Island to deploy the second battery there.

But before that could happen, the Confederate steamer Ida descended the river on the morning of the 13th on a routine run to Fort Pulaski.  Most of the guns recoiled off the firing platforms, allowing only nine shots from the battery.  Although the Ida passed, improvements to the gun platforms prevented a return trip.

On the afternoon of February 14, Confederate gunboats dueled with Battery Vulcan from the distance of a mile upstream (coincidentally the same day that Federal gunboats attacked Fort Donelson in Tennessee).  Battery Vulcan responded with thirty shots which kept the Confederates at bay.  This success allowed the Federals to pass men, cannons, and equipment to Bird Island and establish Battery Hamilton.  By February 20 that location had one 8-inch siege howitzer, one 30-pdr Parrott, one 20-pdr Parrott, and three James rifles in place.  With that accomplished and similar advances on Tybee Island to the southeast of Fort Pulaski, the Federals had cut Fort Pulaski off from resupply.

Gilmore directed the placement of one additional battery, as seen in the wartime map above, on Long Island facing Fort Pulaski.  This sealed the “back door” to the fort by covering the demilune and wharf.  I’ll turn to the setup of the siege batteries in a later post, but we’ve already seen where that ends.

Today the locations mentioned above are just as inaccessible as they were in 1862. Daufuskie Island is now mostly private resorts, accessible only by ferry.  Wall’s Cut, going by the name Watts Cut on some maps, is now part of the Intercoastal Waterway system, still connecting Wright’s to the New River.

After years of channel management, Bird Island became one with Long Island.  I’ve seen Battery Hamilton from a boat and a historical marker stands notes its location, but the site is somewhat protected from visitors by the surrounding marsh.  Archeological surveys of the battery located wood and other structures. However, Battery Vulcan is likely under several layers of till deposited by dredging and shoreline stabilization efforts.

While today only the occasional fisherman visits these out of the way locations, 150 years ago they were the front line of the Civil War.