Consider this watercourse in northern Virginia.

This is Wolf Trap Run near the intersection of Beulah and Browns Mill Roads just north of Vienna, Virginia:

Wolf Trap Run is a fairly typical stream encountered in northern Virginia.  While the major streams, such as Difficult Run, Broad Run, Bull Run, Pimmit Run, and Cameron Run tend to run several feet deep at points, the smaller tributaries often measure just inches deep.  We might cross these streams with a skip and a jump, suffering only a wet shoe.  But imagine crossing 10,000 times in rapid secession, and how that might wear down the creek bottom.

Also note the banks of the Wolf Trap.  After even moderate rains, the creek turns into a torrent, eroding a “U-shaped” bed.  This gives the banks a significant step.  Again no major barrier for most hikers, but is easily eroded out with even a few hundred crossings.

The reason for the creek’s small flood problem lays with the terrain.  Technically perhaps along the “fall line,” the hills and ridges around this part of Virginia are bedrock.  Indeed the summer growth to the far left of Beulah Road in this view masks a rock outcropping that from time to time “reaches out” to grab passing motorists.  The yellow traffic sign notes the sharp turns in Beulah Road as it passes over this rocky ridge.

And where the ridges allow, the creeks often expand across the bottom lands forming marshes.  This view across Browns Mill Road shows one of these fed by Wolf Trap.

Looking to the Civil War era “McDowell map”, I don’t see much correlation to the modern roads in that immediate area.  My estimate is the modern intersection of Beulah and Browns Mill Roads was in the red circle indicated below. 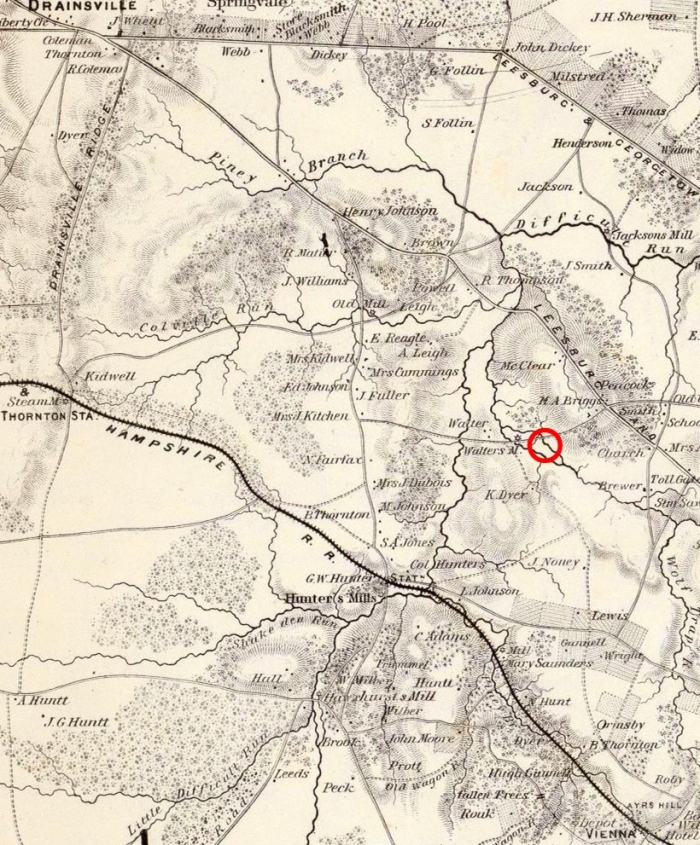 I stress that is my estimate.  I know there are readers out there who can speak more authoritatively on the location.  So by all means let me know if I’m off here.

I am not aware of any significant Civil War activity at the spot where the photos were taken.  Without a doubt “someone” passed through on their way to do “something” at “sometime.”  I could be wrong, but I don’t think there were any “marker worthy” activities which occurred at the intersection of Beulah and Browns Mill.

The reason I shared the photos and maps here, however, was to illustrate a point about the topography encountered by the Federals during their advance towards Centreville in July 1861.  Every little creek and stream presented a challenge to movement.  Some challenges, of course, were easy to overcome.  Others presented major barriers.  When considering the Federal’s rate of march, the equation should include factors for these challenges.