Today, Keith over at Cosmic America posted a look at that timeless classic, The Horse Soldiers.

Not to over play this, but The Horse Soldiers is an AMC staple.  I think the FCC made it some mandatory showing.  Heck, for years the local stations aired the movie in that ‘ween sport season month after the Super Bowl on Sunday afternoons.  I may have seen it a dozen times… no make that a dozen dozen!   In fact, I’ve seen it so many times I’ve memorized the lines in the Italian and Spanish dubbed releases.

Keith, what rock you been living under, man?  🙂

Seriously, Keith makes several good points about the movie.  For the rest of you living under rocks without a background in our fine Western Theater, this movie sorta, kinda portrays Grierson’s Raid in the Vicksburg campaign.  Maybe a whole lot of Hollywood spin put in for good effect.

The flick does come across with a double dose of good old red-white-blue.  Lots and lots of stereotypes.  And perhaps a bit more “cowboy” than the Civil War could stand.  You see the hard-bitten “Yankee” commander, Colonel John Marlow, played by John Wayne (of course).  Miss. Hannah Hunter of Greenbriar (Constance Towers) is a page from Gone with the Wind…. oh, but with that little bit of Belle Boyd thrown in for good measure.  Her servant Lukey (Alethea Gibson) seems confined to the “faithful servant” character.  Although there is that little reference to “contraband.”

And Lots of marching songs in the movie.  But remember this movie was filmed at a time when the height of special effects was some guy in a lizard suit crashing through model buildings.  The soundtracks were in many cases part of the dialog, not just some extra set of tracks on a CD used to pump up publicity for the flick.

Kendall:  How are Susan and the kids?

Um…. perhaps cordiality, but these guys are not sharing a mint julep on the veranda. These guys are sparing all through those smiles.

And Miss Hunter (of Greenbriar) leaves no doubt as to her sentiments about Yankees: “They’ll catch up to you and cut you to pieces, you nameless, fatherless scum. I just wish I could be there to see it.”

The “Cadets go to War” segment is worth note.

Yes lots of anachronisms… Lots of fine Southern Patriotism… and the Confederate regulars firing “Peter” and “Paul” with a torch, vice a lanyard!   I actually wonder if the battle scene inspired Ronald Maxwell for the First Manassas battle in Gods and Generals.

I recall reading the basis for the “Cadet” incident was not, as many have said, the VMI appearance at New Market, but rather the lesser known Alabama Corps of Cadets at Tuscaloosa.  The narrative on the marker seems to better match the storyline from the move… well except that the cadets didn’t do so well at Tuscaloosa.

I must say I’ve always found the Confederate deserter scene the most complex, however.  Not often that Confederate deserters get screen time (even today).  And having the damn Yankee Colonel turn them back over to the local sheriff (with the complements of Miss Hunter of Greenbriar), sort of spins a non-traditional tale.

And how much “burning” and “looting” went on?  Weren’t the blue coats supposed to have forked tails and hooves?   Seemed to be a whole lot of food left around for Miss Hannah Hunter (of Greenbriar) to serve up for the officer’s meeting. 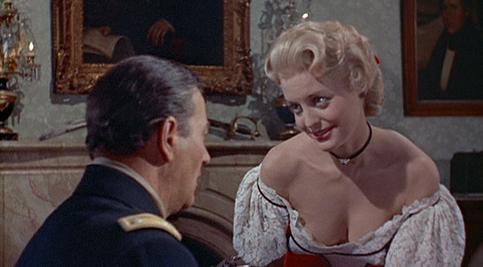 “Now, what was your preference? The leg… or the breast.”

I could break down the movie into all sorts of details, but I’m not some film critic.  I’m just filing a post on a slow day!  I do recommend a review of the movie by my friend Greg Biggs, from the June 1993 issue of Blue & Gray Magazine.  Get the back issue, as it also includes a feature article on Grierson’s Raid.

In that article Greg mentioned the intended ending for the movie, which I think is important to understanding the presentation.   John Ford planned to show the troopers in victory entering Baton Rouge.  However, one of Ford’s friends, stuntman Fred Kennedy, suffered a broken neck from a horse stunt.  Kennedy died from the injury.  As result, Ford cut the production short, ending the movie with the final battle and abrupt end.

Like Keith says, viewers today should consider the movie in context with its year of release – right before the centennial.   So there is a lot of extra action and flash.  Consider a trailer posted around that time.  Gotta sell to those budding little Johnnie Rebs and Billy Yanks out there!

If you are taking recommendations, Keith – bookend The Horse Soldiers with The Undefeated…. Let’s just say Unreconstructed Rebel Spring Break!