Turning from the “guns” that served both sides at Fort Sumter in 1861, another type of weapon in the batteries was the seacoast howitzer.  As mentioned in an earlier post tracing the history of columbiads, the seacoast howitzer filled a requirement to fire shells at enemy ships venturing too close to the friendly shores.

Earlier weapons, from the time of the War of 1812, that carried the “columbiad” resembled heavy howitzers.  But these fired solid shot.  By the 1830s tests indicated that shells would cause considerable damage to wooden ships of the era.  The Army wanted to complement conventional seacoast guns with “seacoast howitzers” firing such shells.  In 1839, the Army issued contracts to Columbia Foundry, in Washington, D.C., and West Point Foundry, in New York, for 8-inch seacoast howitzers (the term “bomb cannons” appeared on some documents) built to a “pattern of 1839.”  The contracts specified the use of hot blast iron.  Columbia Foundry delivered 38 of these; and West Point produced 20.

One of the later is on display at the memorial for General John Sedgwick in Cornwall Hollow, Connecticut.  Friend and fellow marker-hunter Bill Coughlin forwarded a few pictures of that howitzer.

The profile follows a familiar pattern for external moldings and fixtures.  But there is one extra “ring” on the reinforce just in front of the lockpiece.  This ring indicates the separation of the first and second reinforce.  Hard to determine without laying a level on the howitzer, but that first reinforce is a true cylinder, like those seen on the larger 32-pdr and 42-pdr models of the same time period.  The addition of the ring allows easy identification of the seacoast howitzer.

The muzzle itself incorporates a fillet and cavetto.  On the muzzle face of this piece are the initials of Rufus Lathrop Baker (R.L.B.) and the registry number 4.  Note the test scar on the muzzle.

Aside from the example in the photo here, only one other 8-inch Model 1839 exists today.  However in 1840, the Army issued more contracts for a very similar Model 1840, but this time specifying the use of “cold blast” iron.

The difference between hot and cold blast is better left to a separate post, as it transitions easily into a larger discussion of the study of metallurgy in the 19th century.  But the short version is hot blast involved blowing pre-heated air into the furnace in the smelting process.  While reducing the cost to manufacture, this also changed the composition of the metal.  The Army later determined hot blast iron lacked the endurance to use with cannon and specified traditional cold blast iron instead.

Both 8-inch and 10-inch models appeared.  But for our discussions here, let me focus on the 8-inch model that was used at Fort Sumter.  I lack photos of any Model 1840 seacoast howitzers.   So in that place I’ll offer one of my tables indicating the dimensions of the various seacoast howitzers. 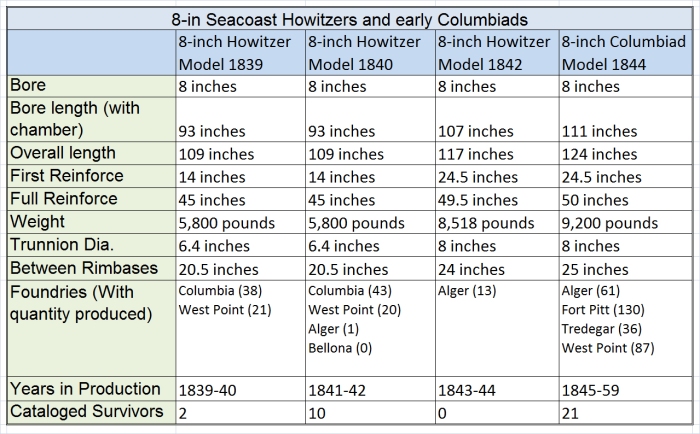 Notice the same dimensions for both the Model 1839 and 1840.  Other than a slightly reduced muzzle swell diameter, the two models were externally indistinguishable.  Columbia produced 43 of the Model 1840 and West Point added another twenty.  Cyrus Alger of Boston produced one experimental howitzer to this pattern.  Bellona Foundry initially received an order for twenty, which was later cancelled (occurring about the same time as many other issues at Bellona with cannon production).

Not content with the design, the Army again revised the howitzer design in 1842.  The improved model featured the ratchet bar in place of a traditional knob on the breech.  In place of the reinforce ring was a six-inch wide reinforce band situated over the mouth of the chamber.  The chase tapered gradually, with a chase ring, to a straight, un-swelled muzzle.  Cyrus Alger received a contract for thirteen 8-inch and seven 10-inch, delivering them in 1843-44.  Only one of the 10-inch howitzers survives today, and none of the 8-inch types.  But these served as transitional pieces to the Model 1844 Columbiad design.

Given the quantity of manufacture, likely the howitzers arrayed around Charleston were of the Model 1840 variety.  Although the Model 1839 would easily pass without much note on the inventories.  The South Carolinians captured a small quantity of these weapons in December 1860.  The Fort’s garrison positioned several of these guns in key positions around the fort.

In my next post I’ll discuss the performance of the 8-inch howitzer and discuss how these were used at Fort Sumter.